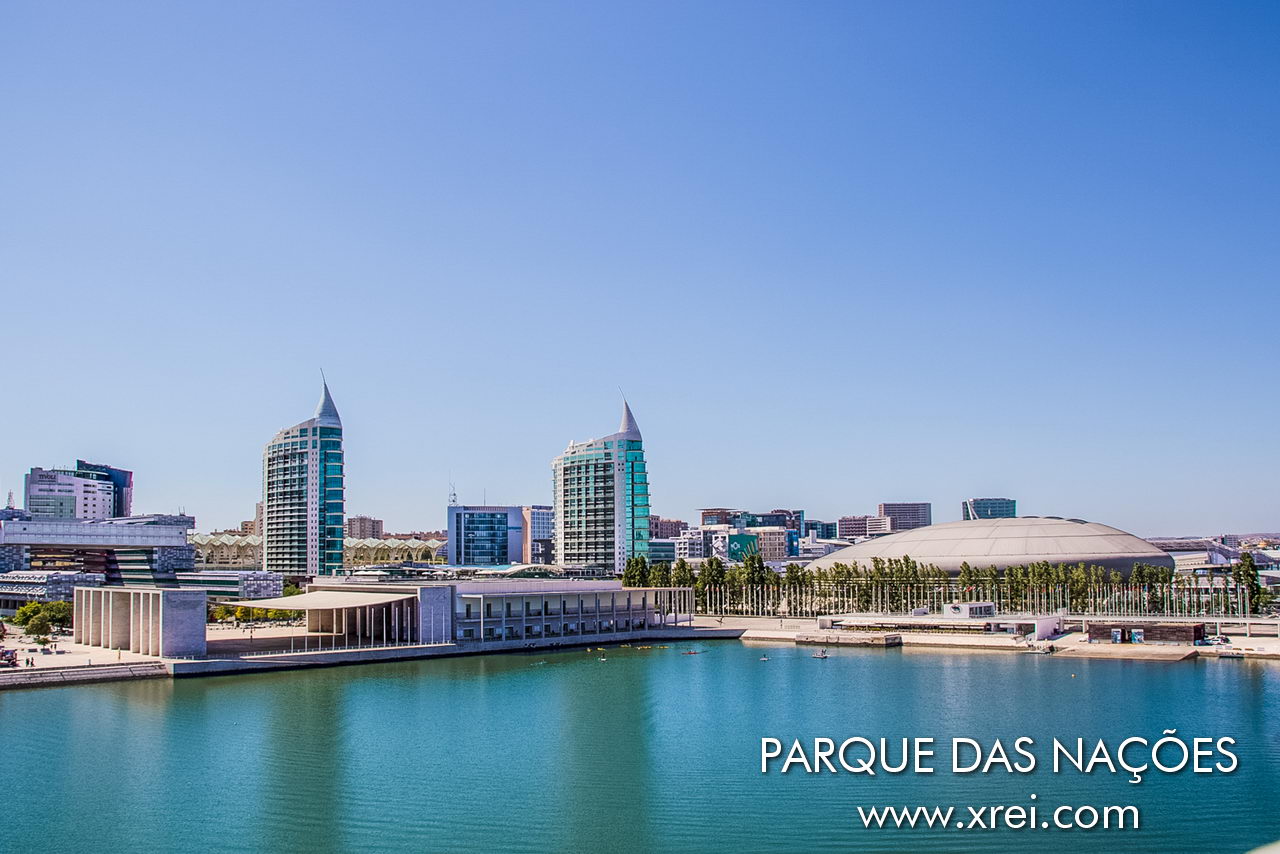 Parque das Nações is a neighborhood recreated in the late 90s with the aim of hosting the EXPO98 world exhibition that took place in Lisbon in 1998. It is currently the most modern neighborhood in Lisbon, with contemporary design infrastructures in a riverside location, with immense spaces around open air to live the peaceful environment. Parque das Nações also hosts cultural events, business fairs and shopping center The environments of Parque das Nações are composed of varied themes, namely water, which is present in many places, from water mirrors, to gardens with a water theme, to the Lisbon Oceanarium, the proximity of the river and the Vasco da Gama shopping mall , with several environments related to the ocean, including the relaxing environment of the water cascade present in the roof of the building

The Expo, as it is also known, is one of the main places of nightlife in the Portuguese capital due to the street of bars and clubs that are found here. Parque das Nações is highly sought after by contemporary architecture lovers due to the various buildings of modern architecture, namely the Portuguese Pavilion by Álvaro Siza Vieira, the Lisbon Oceanarium by Peter Chermayeff, the Atlantic Pavilion by Regino Cruz , Teatro Camões by Manuel Salgado and Gare do Oriente by Santiago Calatrava; Pavilhão de Portugal is a building classified as a Monument of Public Interest due to the project of the architect Siza Vieira, which consists of a square covered by the largest concrete peak suspended by steel cables, defined by two concrete porticoes. The idea is based on the idea of ​​a sheet of paper resting on two bricks. This work won the Valmor Prize in 1998. Currently, the Pavilhão de Portugal is in charge of the University of Lisbon, which allocates space to an activity in areas such as education, scientific research, knowledge promotion and presentation to the labor society which is developed by the University.

for nature lovers, Parque das Nações has approximately one third of the territory populated with gardens and green areas with urban art, namely Alameda dos Oceanos, Jardins Garcia d’Orta and Hanging Gardens; buildings with drawings by António Segui, Arthur Boyd and Erró, or with works by Adalgisa Duarte, António Vidigal and João Cutileiro on avenues and sidewalks 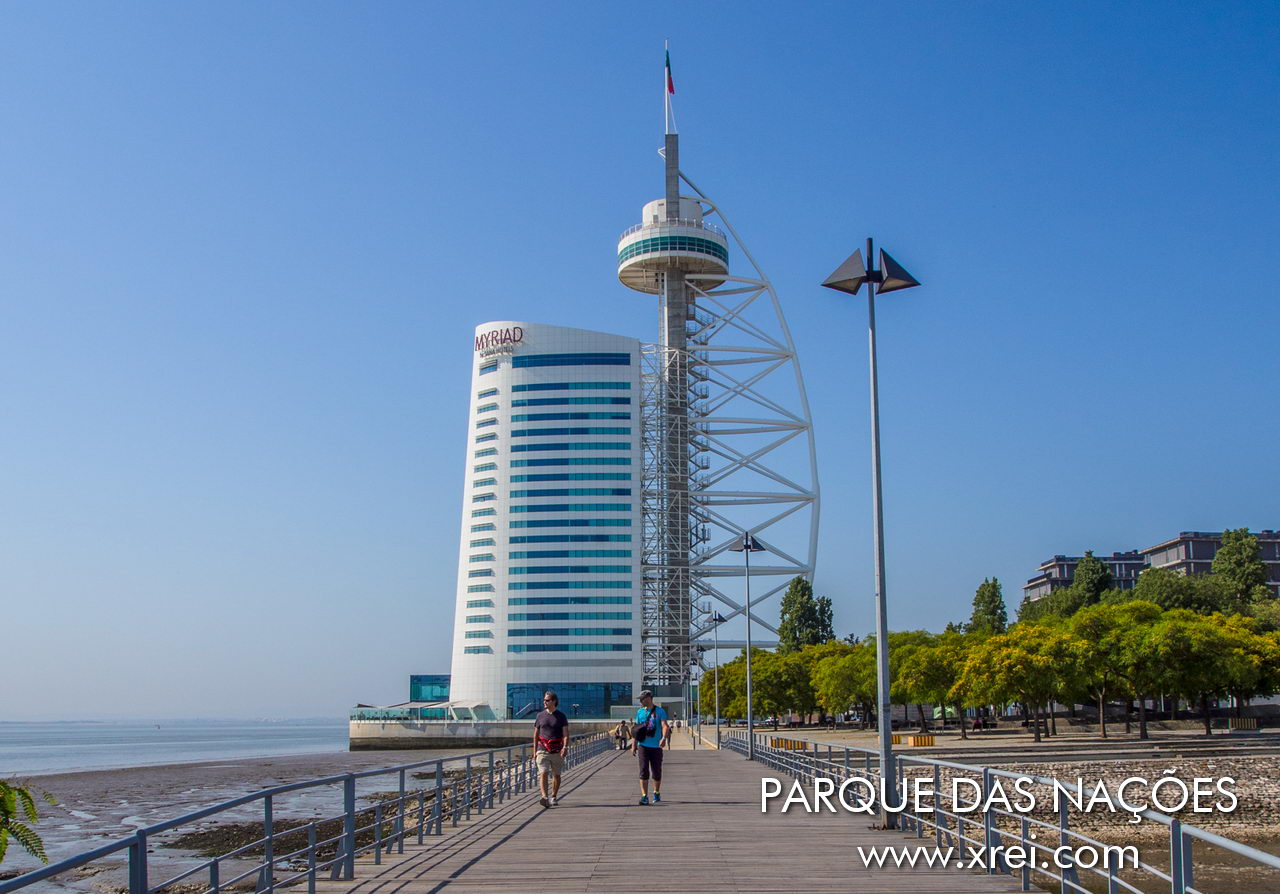 Vasco da Gama Tower is the tallest skyscraper building in Portugal, a tower in mixed structure with a height of about 140 m. The architecture of Leonor Janeiro, Nick Jacobs and SOM – Skidmore, Owings and Merrill) was inspired by the shape of the sails of a caravel, with the structure of the river. During the EXPO98 exhibition, a luxury restaurant with panoramic views over the Tagus River operated at the top of the tower. The Tower currently functions as a luxury hotel in the SANA Hotéis chain, with a new building added to the initial tower

Parque das Nações is one of the main points of arrival and departure of passenger transport in Lisbon, with trains (suburban and long-haul), bus, metro (with direct connection to Lisbon Airport) and taxis. Parque das Nações is a modern, cosmopolitan, multicultural place, where you can stroll, do sports, do business and live safely.

Other attractions to explore at Parque das Nações

Vasco da Gama shopping center is a mall with more than 50,000 square meters, approximately 170 stores spread over 3 floors, which include 33 restaurants, 6 movie theaters, a Health Club and various customer service. It also has covered parking with a capacity for 2,523 spaces. The name Vasco da gama is a tribute to Vasco da Gama, discoverer of the sea route to India. The architecture of the Vasco da Gama shopping center is designed by the architect José Quintela, with the aim of evoking memories of the seas and oceans, with the environment of the interior of a large ship. 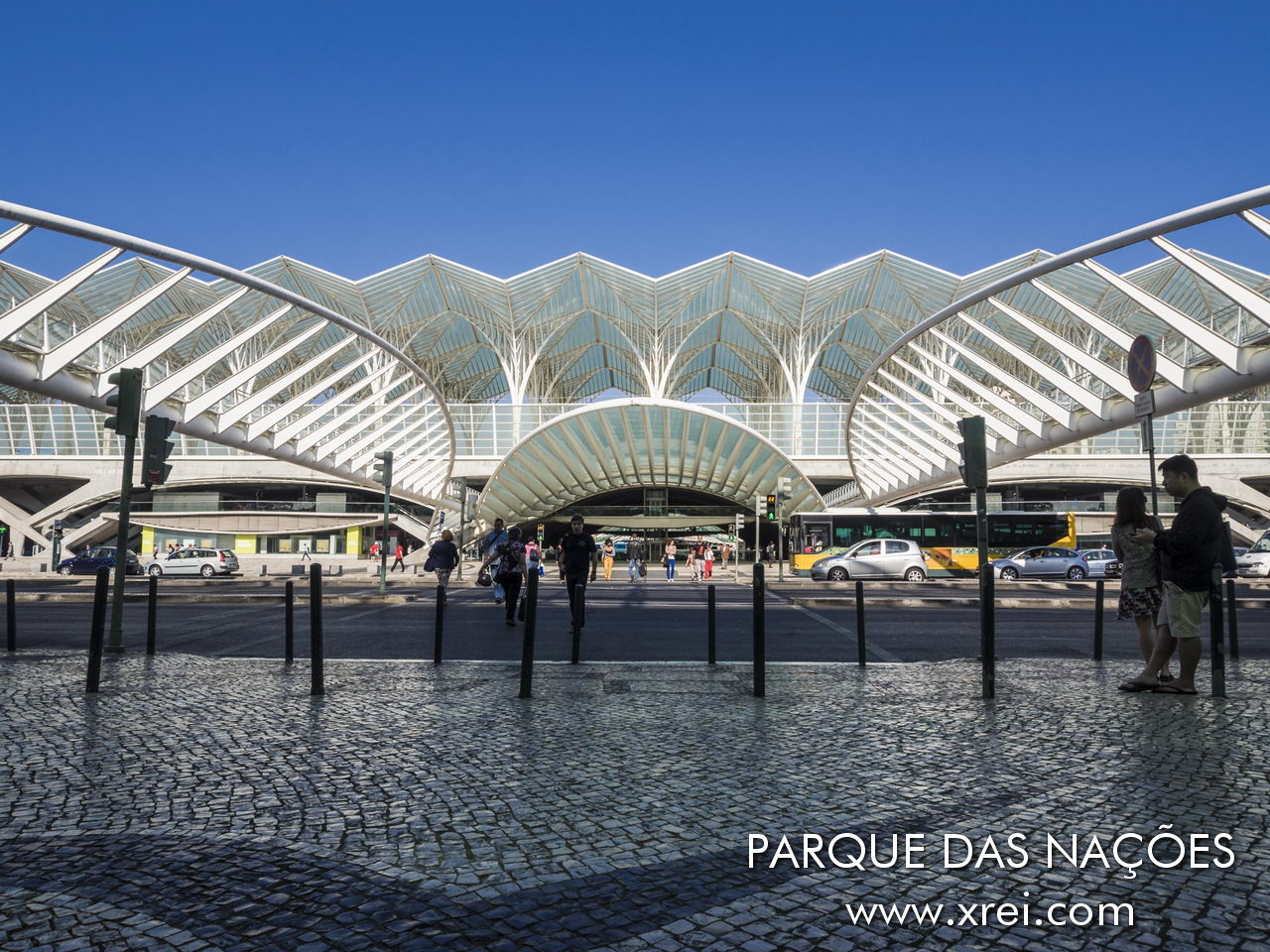 Gare do Oriente, also known as Gare Intermodal de Lisboa (GIL). With contemporary architecture, it was designed by Spanish architect and engineer Santiago Calatrava, completed in 1998 to serve Expo’98, and later Parque das Nações. Gare do Oriente includes the Metropolitano de Lisboa (Oriente) station, a commercial space and a bus station with connection to LIsboa, in the north, center and south of Portugal with suburban trains and medium and long distance trains. 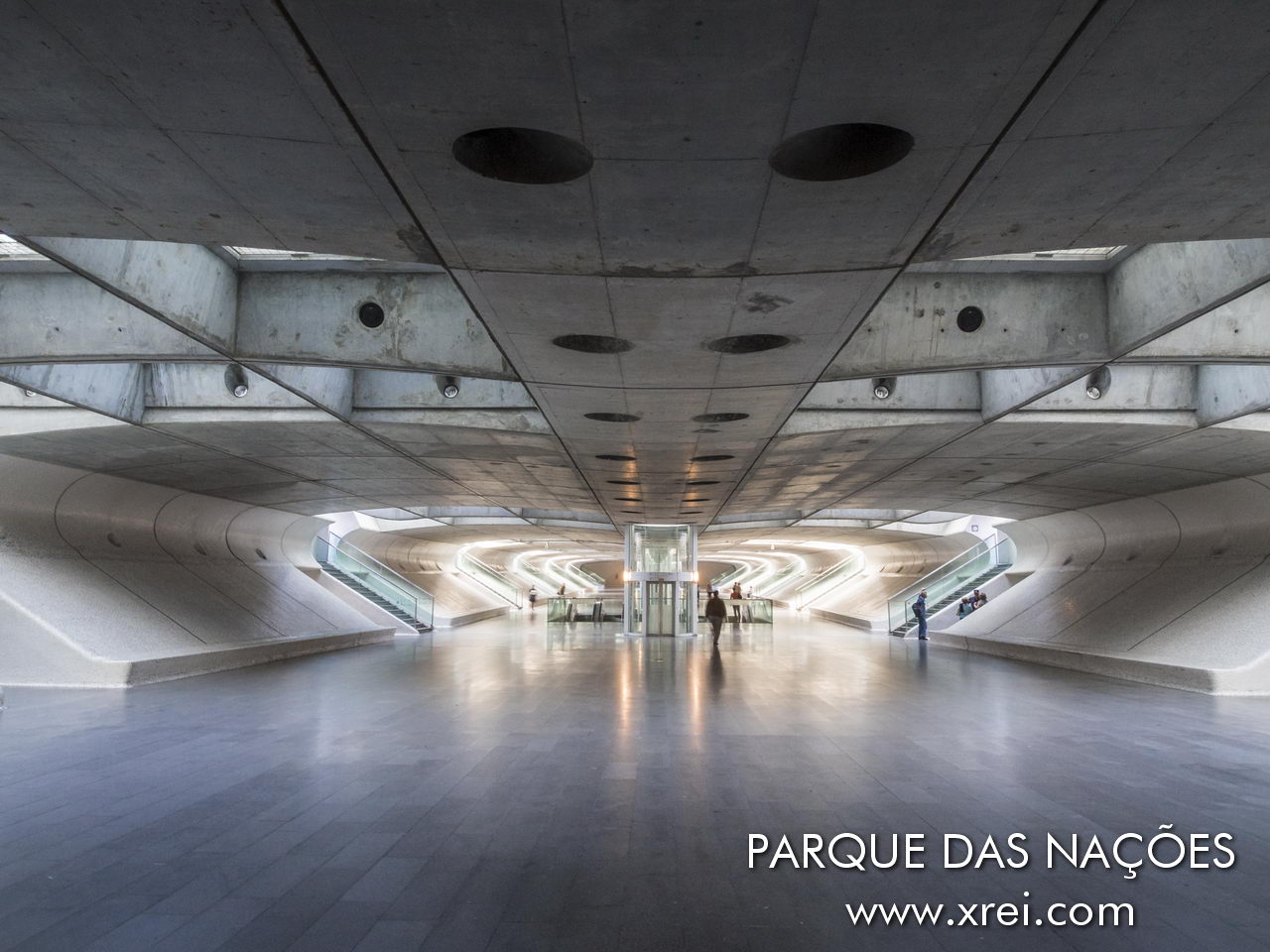 Gallery of access to the Lisbon metro at Gare do Oriente, Oriente station, with a futuristic architecture designed in concrete and glass

Parque das Nações is located on the edge of Lisbon, close to Marvila and Beato 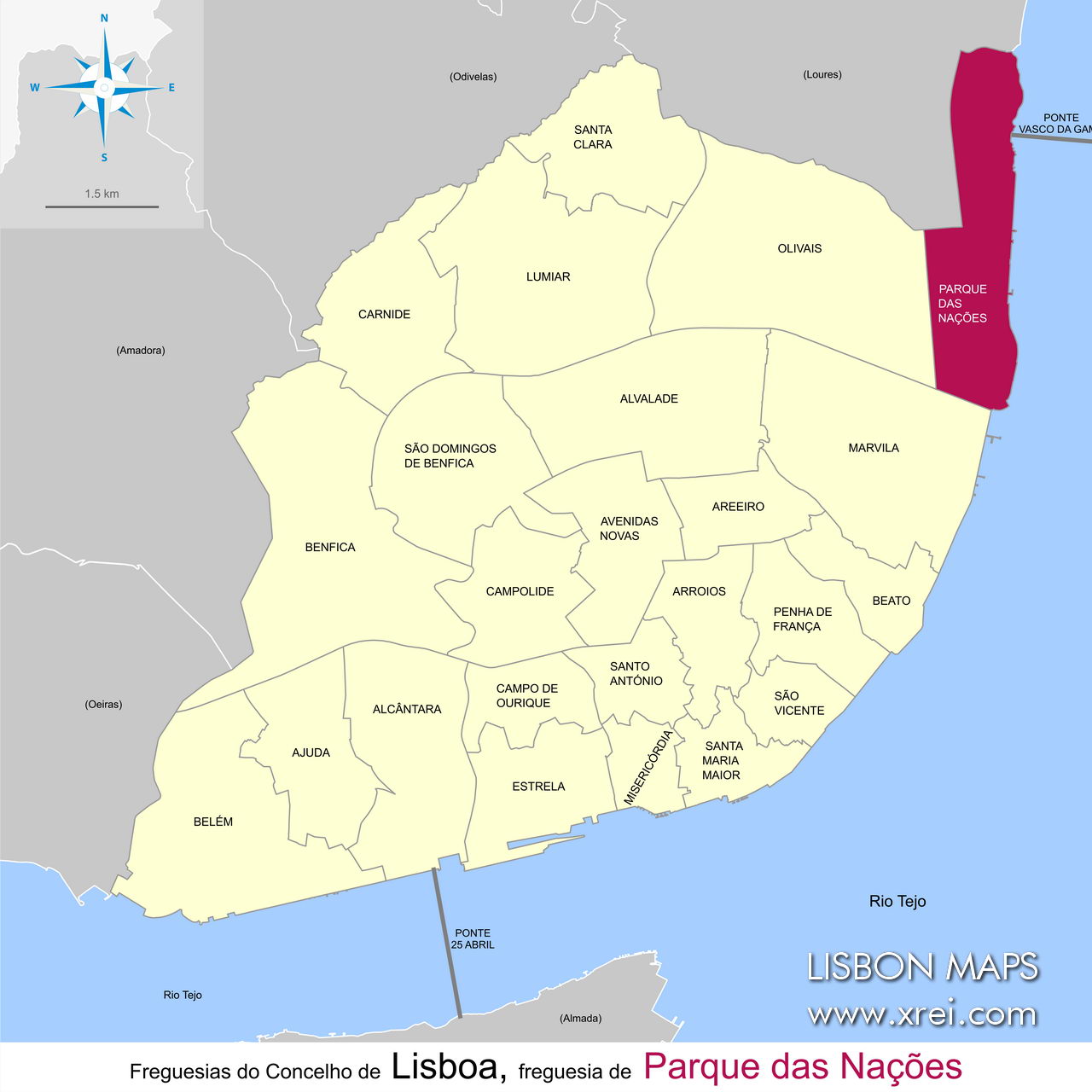 Parque das Nações parish location on the map of Lisbon