Belém, aerial view of the riverside with the monuments facing the river

Belém, the Lisbon of Discoveries!

Belém is a coastal neighborhood in Lisbon known for the history of Portugal, for the monuments related to the time of the Portuguese Discoveries, with wide spaces of gardens, coastal pedestrian areas, marinas and restaurants facing the river. The neighborhood of Belém is located on the west side of the city, bordering Alcântara to the east, the district of Ajuda to the north and Algés, in the bordering municipality of Oeiras located to the west. Belém is close to Restelo, a neighborhood known for its noble class housing and the existence of embassies from different countries.
Belém was the place of departure of the Portuguese caravels in the 15th century, during the Age of Discovery. It is in Belém that we find the pastel de Belém, the Jerónimos Monastery, the Belém Tower, the Padrão dos Descobrimentos and the Belém Cultural Center. Belém is a neighborhood full of life, history, culture and art. In Belém it is possible to stroll along the famous Portuguese sidewalk, observe statues, live the life provided by groups of tourists dazzled by the beauty of the Tagus river and monuments, have a coffee on the terrace in front of the river or do sports. On Sundays in the morning, Belém is a pilgrimage spot for Lisbon residents, and during the summer it is possible to observe groups of people practicing ancient Chinese art of tai-chi, running or cycling. Belém is a unique neighborhood that leaves no one indifferent.

The neighborhoods of Belém and Restelo belong to the Parish Council of Belém.

Attractions to visit in Belém (top 10) 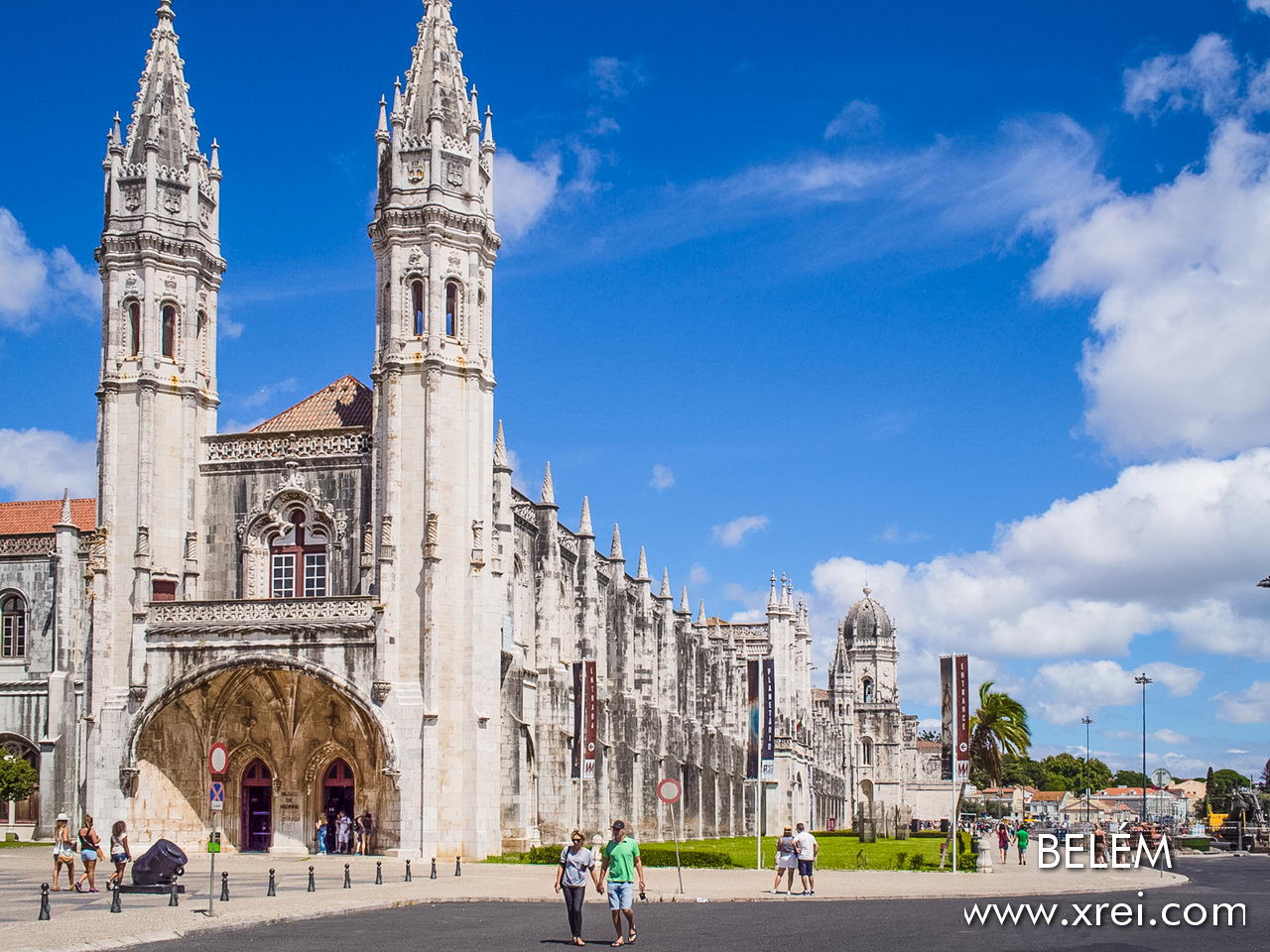 Jerónimos Monastery is one of the most important monuments of Lisbon from the time of the Portuguese Discoveries, with an imposing architecture and decoration carefully maintained over the centuries

1. Jerónimos Monastery: is one of the most important monuments in Lisbon and the time of the Portuguese Discoveries, located in Praça do Império. The Jerónimos Monastery started to be built in 1501 with money obtained through taxes applied to spices that came from the Empire, namely Vintena da Pimenta, which corresponded to 5% of profits on trade with Africa and Asia. The architects responsible for the Jerónimos Monastery project were Diogo de Boitaca (1460-1528), João de Castilho (1490-1581), Diogo de Torralva (1500-1566) and Jerónimo de Ruão (1530 -1601). Dom Manuel I (1469-1521) donated the monastery to the order of São Jerónimo with the aim of praying for the souls of fishermen, sailors and navigators who left Restelo beach. The main points of interest of Jerónimos Monastery are: 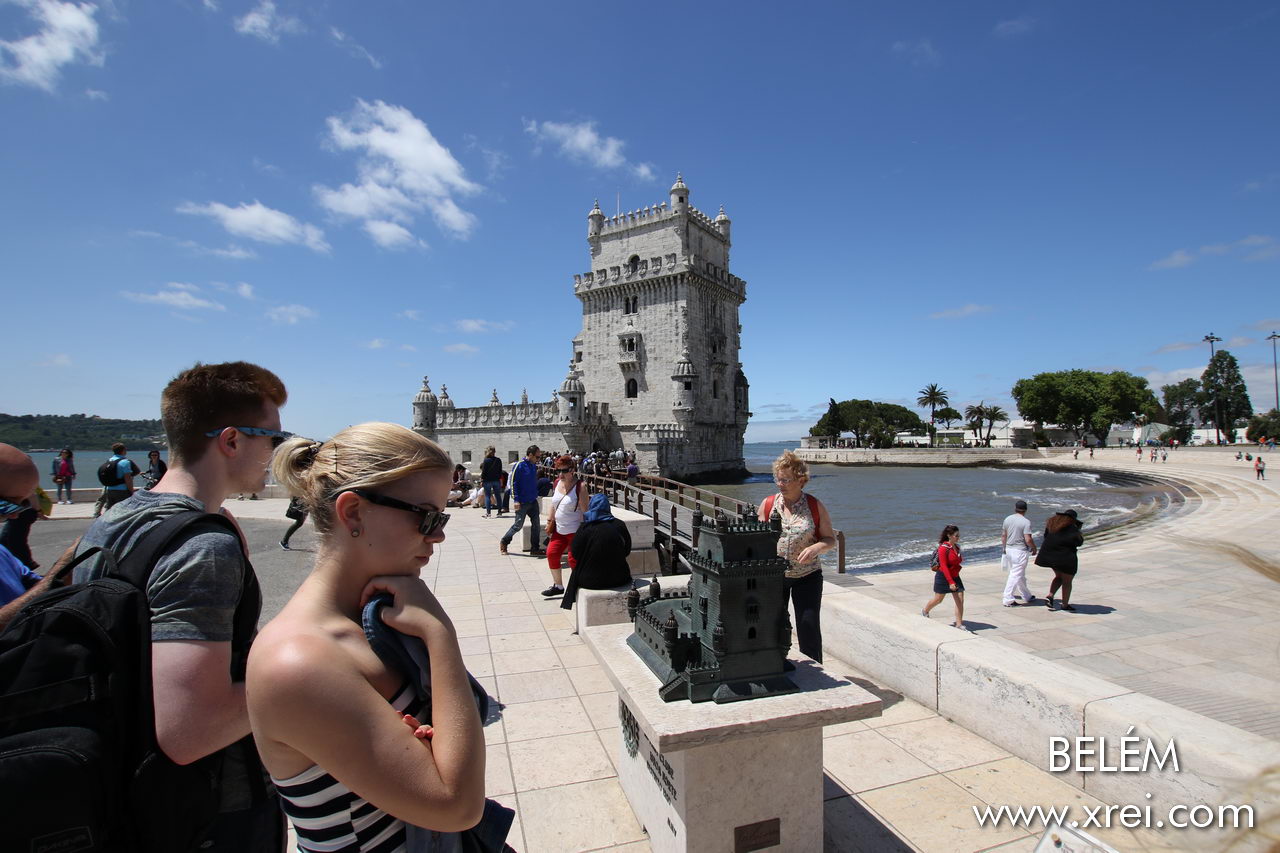 Torre de Belém (Torre de São Vicente) is one of the most visited monument in Lisbon, having been an old fortress, a prison and currently a cultural attraction with a lot of history to know, classified as World Heritage by Unesco

2. Torre de Belém (Torre de São Vicente): is a Portuguese cultural heritage monument located on the old beach of Belém, classified since 1983 as World Heritage, by (UNESCO), it is currently one of the most visited monuments in Lisbon. The Torre de Belém was built between 1514 and 1516 by Francisco de Arruda, was elected on July 7, 2007 as one of the Seven Wonders of Portugal. The Torre de Belém monument had several functions, namely fortress and prison, currently the main points of interest are: Padrão dos Descobrimentos is one of the great attractions of Lisbon, a monument decorated with 33 statues of the figures of Portuguese discoveries built in Belém facing the river in honor of Infante Dom Henrique, with exhibition halls alluding to the theme of Portuguese discoveries, an auditorium and a viewpoint that allows a panoramic view of Belém and the Tagus river. 3. Padrão dos Descobrimentos: was built for the first time for the Portuguese World Exhibition in 1940 by Cottinelli Telmo (1897-1948) and Leopoldo de Almeida (1898-1975). It was rebuilt, definitely in 1960 in honor of Infante Dom Henrique. In 1985 it was improved with the creation of a viewpoint, an auditorium and exhibition rooms by the architect Fernando Ramalho. The main points of interest of the Padrão dos Descobrimentos are: 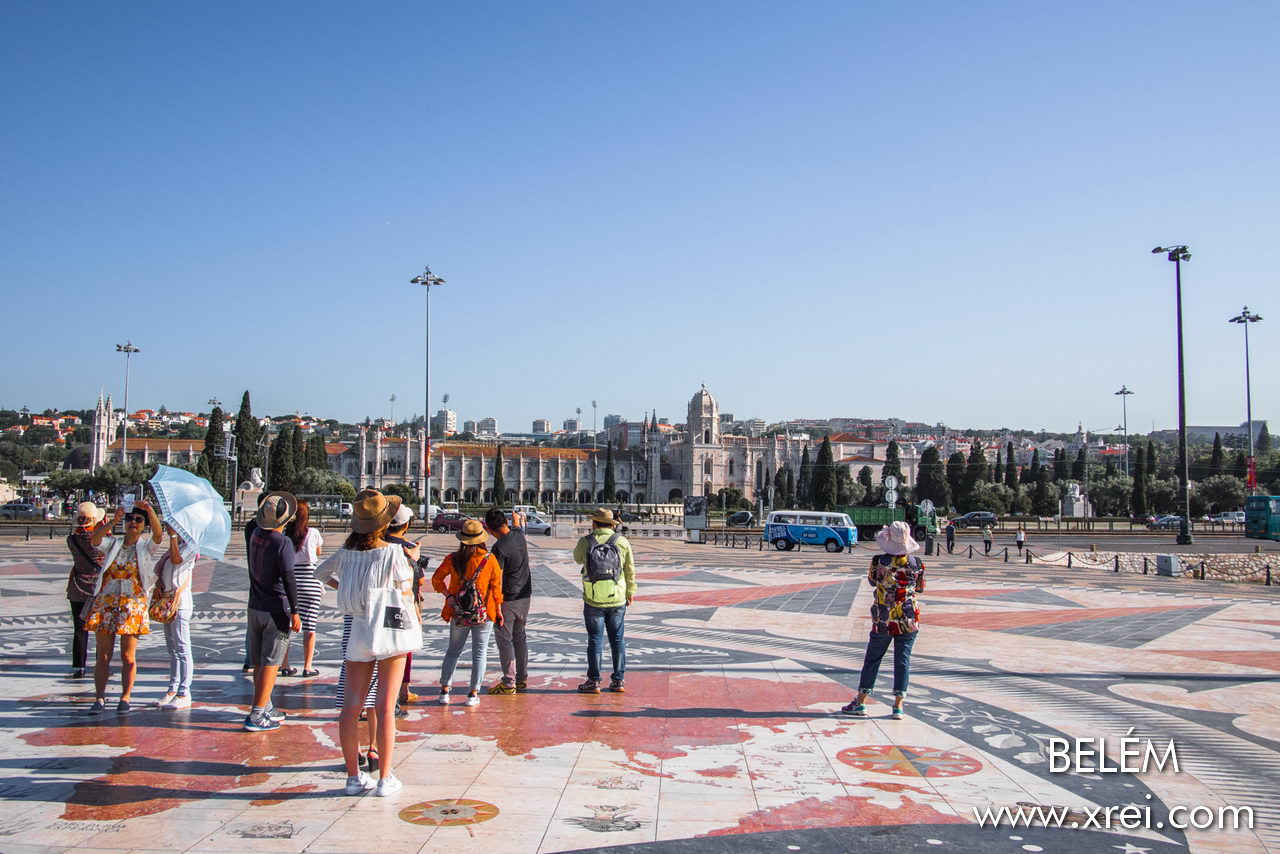 Compass rose of the “Padrão dos Descobrimentos” offered to Portugal by South Africa in 1960, with representation of the main dates and routes of the Portuguese Discoveries

4. National Coach Museum: located between Belém Train Station and the Palace of Belém, the museum was opened on May 23, 1905 by Queen Dona Amélia, wife of King Dom Carlos I. The royal coaches were installed for the first time in the building of the former Royal Riding Arena, designed by Giacomo Azzolini in 1726. On May 23, 2015, the coach collection was transferred to the building where the current exhibition is located. The collection of the National Coach Museum is considered the largest collection of royal coaches in the world. The main coaches are the Coach of Philip II, Coach of Dom João V, Coach of Pope Clement XI, Coche dos Oceanos and the Coche by Dona Maria Francisca de Sabóia.

5. Pastéis de Belém (Former Confeitaria de Belém): is the best known pastry in Lisbon due to the traditional cake “pastel de Belém”, known in Portugal as “pastel de nata”. The Pastelaria e Fábrica dos Pastéis de Belém is located next to the Jerónimos Monastery on Rua de Belém in the same facilities that operate since 1837. The pastéis de Belém were created by a monk from the Jerónimos Monastery at a time when all monasteries and convents in Portugal were closed, causing the monks to have to fight for survival. The recipe for “pastel de Belém” was immediately a success and passed on to the current owners of the space. That was how the Pastéis de Belém Factory started and one of Portugal’s main pastry brands. It is common for queues of customers who gather to enter the pastry shop to surround the block. 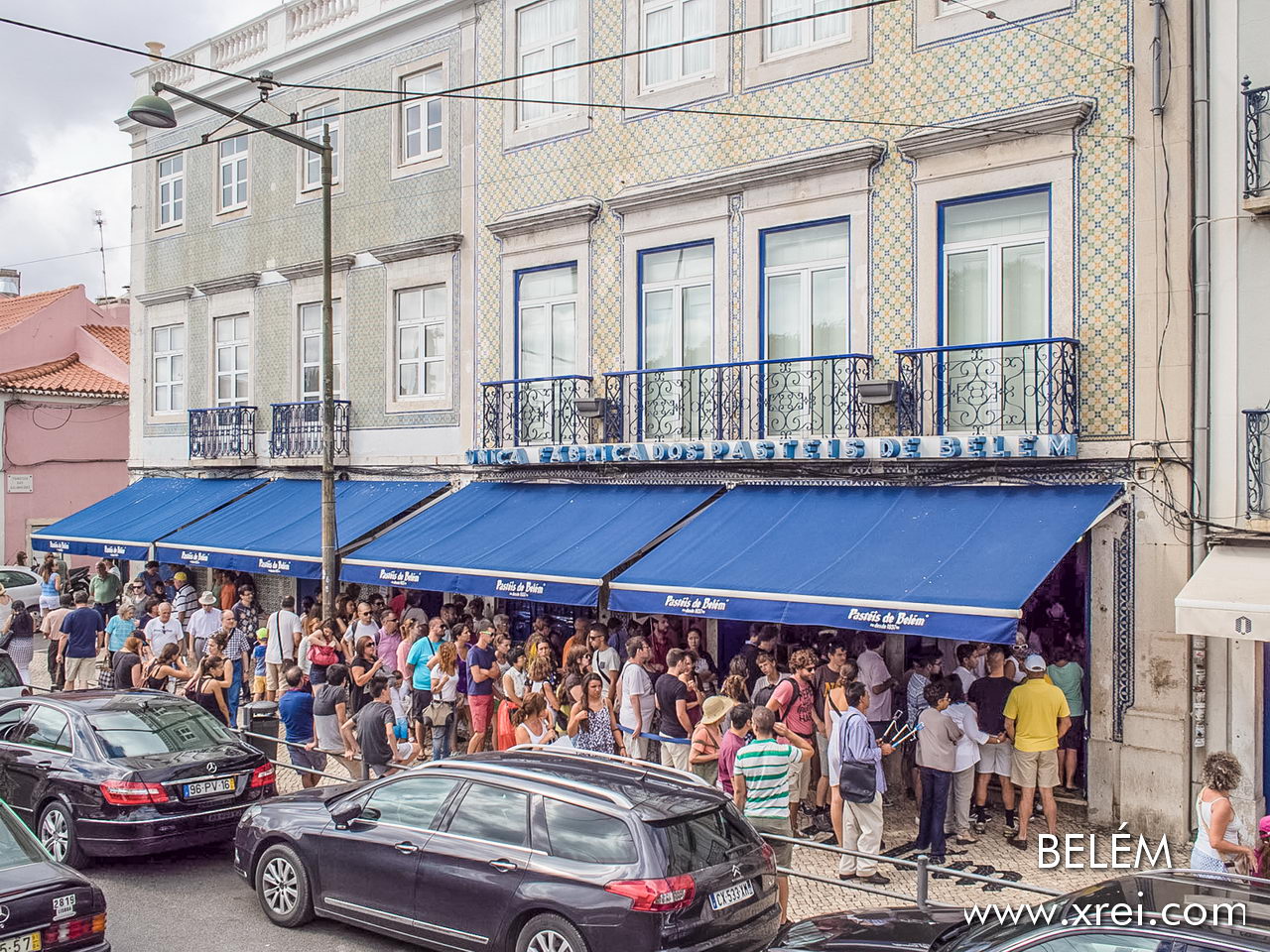 Pasteis de Belém is an egg custard tart, an attraction in Portugal known as “pastel de Nata”. Here in Belém the pastries are produced in a traditional confectionery with their own recipe kept secretly for generations

6. Centro Cultural de Belém – CCB: is a foundation dedicated to culture and art, with spaces for conferences, exhibitions and art shows, with shops and cafes, it opened on the 10th of August 1993 to receive the first EU presidency in Lisbon. The Centro Cultural de Belém, located opposite the Jerónimos Monastery, was designed by Manuel Salgado and Vittorio Gregotti and organized into three main structures, namely:

9. Planetarium Calouste Gulbenkian: is a Live Science Center dedicated to a series of dynamic and interactive activities related to astronomy and planet earth, with shows for visitors aged 3 years and over. age. located next to the Jerónimos Monastery, the Planetarium Calouste Gulbenkian is designed by the architect Frederico George. The Planetarium was opened on July 20, 1965. On July 19, 2005, a new projector was inaugurated with the capacity to represent more than nine thousand stars, the Milky Way or figures of the constellations. The projection room has a circular surface 23 meters in diameter. The main points of interest are the Gallery; the Observatory; and the Library.

Other Attractions to visit in Belém

The monuments of Belém

Options for traveling from the center of Lisbon to Belém

There are many easy options for traveling directly to Belém from the center of Lisbon. Belém is approximately seven kilometers from the center of Lisbon. From Praça do Comércio, you can travel on the Tram 15E, on a direct route. Traveling by bus, numbers 704 or 728, or by train from Cais do Sodré. There is also the option of doing the 7 kilometer coastal route by walking or by bicycle, on one of the various shared bicycle services. A good option may be to buy the Lisboa Card, a transport card that includes admission to museums, a free map and a travel guide. It is possible to buy the Lisboa Card at Lisbon Airport, at Foz Palace in Restauradores, at Santa Apolónia Station, at Praça do Comércio, at Rua Augusta and in Belém.

Belém grew up from the village of Restelo. It was from Belém that several expeditions carried out during the Portuguese Discoveries, namely the expedition of the Conquest of Ceuta in 1415, the expedition of Vasco da Gama, who discovered the Maritime Way to India in 1498 or the expedition of the discovery of Brazil by Pedro Álvares Cabral in the year 1500. The neighborhood of Belém resisted the Earthquake of November 1, 1755, and was consequently chosen as a place of residence for the Royal Family. In the 19th century it had a great growth due to the appearance of the train and was elevated to the municipality with Alexandre Herculano as president. In 1940 the Exhibition of the Portuguese World was organized in Belém, and from this exhibition Belém inherited the Belém River Station, the Museum of Popular Art, the Water Mirror and the Monument to the Discoveries. In the 20th century, the Central-Tejo, the current Electricity Museum, was inaugurated to supply Lisbon with electricity from 1909, and the first aerial crossing of the South Atlantic between Lisbon and Rio de Janeiro carried out by Gago Coutinho and Sacadura Cabral in 1922 .

The main streets of Belém

The most important arteries of Belém are rua de Belém, rua Vieira Portuense, rua dos Jerónimos, Calçada do Galvão and the Avenida do Restelo. Rua de Belém is an area of ​​local commerce and culture, where we can visit the Pastéis de Belém Factory, the National Palace of Belém, the Museum of the Presidency of the Republic, the Museum Nacional dos Coches and Praça Afonso de Albuquerque. Vieira Portuense Street has as main points of interest the fishermen’s houses that until the 19th century were bathed by the Tagus River, and currently transformed into restaurants with a terrace where you can try the typical Portuguese cuisine. On the street dos Jerónimos there is the Jerónimos Monastery, the Casa-Pia da Correção da Corte building, the Os Belenenses football stadium, the Santo Cristo Chapel and the Ministry of Defense building. Calçada do Galvão connects Belém and Ajuda, the main attraction is the Jardim-Museu Agrícola Tropical. Avenida do Restelo is known for being a quiet residential area of ​​houses and embassies. Belém is a place of marinas and sailors, with restaurants facing the river and a constant activity of sailing …

Location of the Parish of Belém on the map of Lisbon

Belém parish location on the map of Lisbon