Alcântara is a riverside parish in Lisbon, former factory and warehouse area, close to the port of Alcântara. Over the last few years Alcântara has been developing new neighborhoods to live in, with condominiums and commercial areas. Old factories have given way to apartment buildings, shops, business centers and other leisure venues

The Alcântara neighborhood is located near the Tagus River, at the northern end of the 25 de Abril Bridge, it is the oldest bridge in Lisbon built to replicate the São Francisco Bridge in the United States of America. Alcântara evolved from an agricultural and holiday area for the Portuguese royal family between the 18th century and the 20th century, into an industrial area in the second half of the 20th century. This Lisbon neighborhood has a great diversity, having two of the largest green areas in the city: the Parque Florestal de Monsanto and the Tapada da Ajuda, buildings of four and five that were built in the 20th century, the Ponte 25 de Abril, the Doca de Santo Amaro, with parking capacity for 331 boats, the Águas Livres Aqueduct, the pedestrian corridors and cycle paths located next to the Tagus, where you can see people resting or doing sports in safety, the Alcântara Docks, one of the best known places from the city’s nightlife and a complex of warehouses where the LX Factory is located, where there are corporate offices, cafes, restaurants and many other establishments.

Ler Devagar bookshop, located in Alcântara in LX Factory is a reference bookshop in Lisbon, located in an old factory, the bookshop Ler Devagar has available to its visitors a wide range of books, with a reading space and café bar.

LX Factory is a popular space for young artists, designers and other creative professions. Alcântara has been rehabilitated with various urban projects, namely the Alcântara Valley Structuring Green Corridor, which aims to link the Monsanto Forest Park to the Tagus River with bicycle paths and footpaths. Alcântara is one of the most beautiful and safest areas in Lisbon, ideal for living, walking and doing business.
The name Alcantara comes from the Arabic al-qantara, which means bridge. Alcântara is administered by the Alcântara Parish Council.

Places to visit in Alcântara LX FACTORY is an old area of factories and warehouses located in Alcântara recently reused to create a business center, shops and catering space. It is currently one of the most popular places for young people who visit the Portuguese capital due to the relaxed and differentiated style that we can enjoy 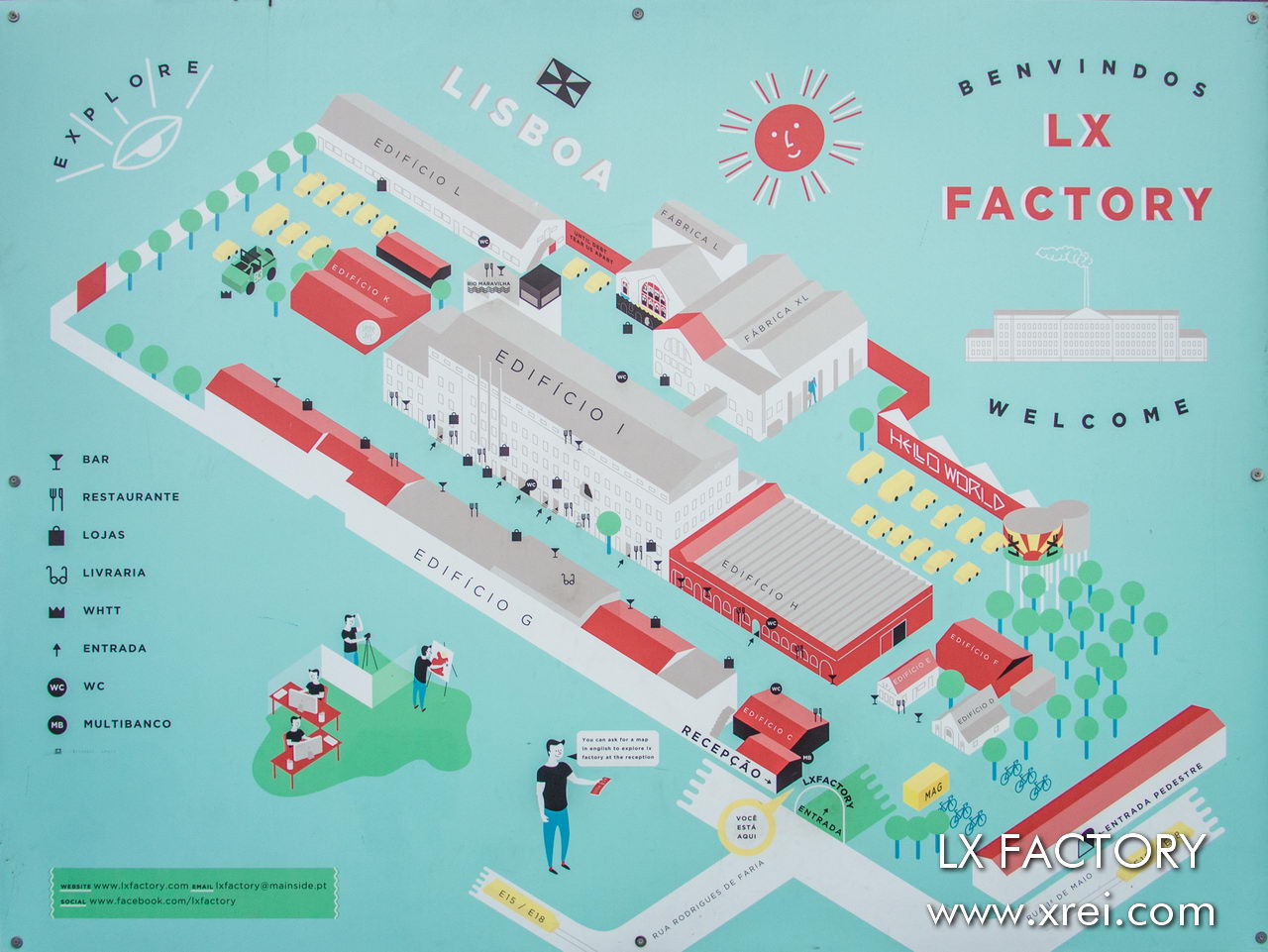 Map of the LX enclosure FACTORY in Alcantara Alcântara new and old, in this image we see Fábrica Ideal, an old hand-painted tile factory in Lisbon, along with the new apartment condominiums that are replacing Lisbon’s historic factories View of outdoor terrace of Rio Maravilha, LX FACTORY Rooftop bar. A restaurant with bar and dining space located in Alcântara, on top of a Lx Factory building, from where we can have a privileged view over the Tagus River and the old factories of Alcântara

Location of the Parish of Alcântara on the map of Lisbon 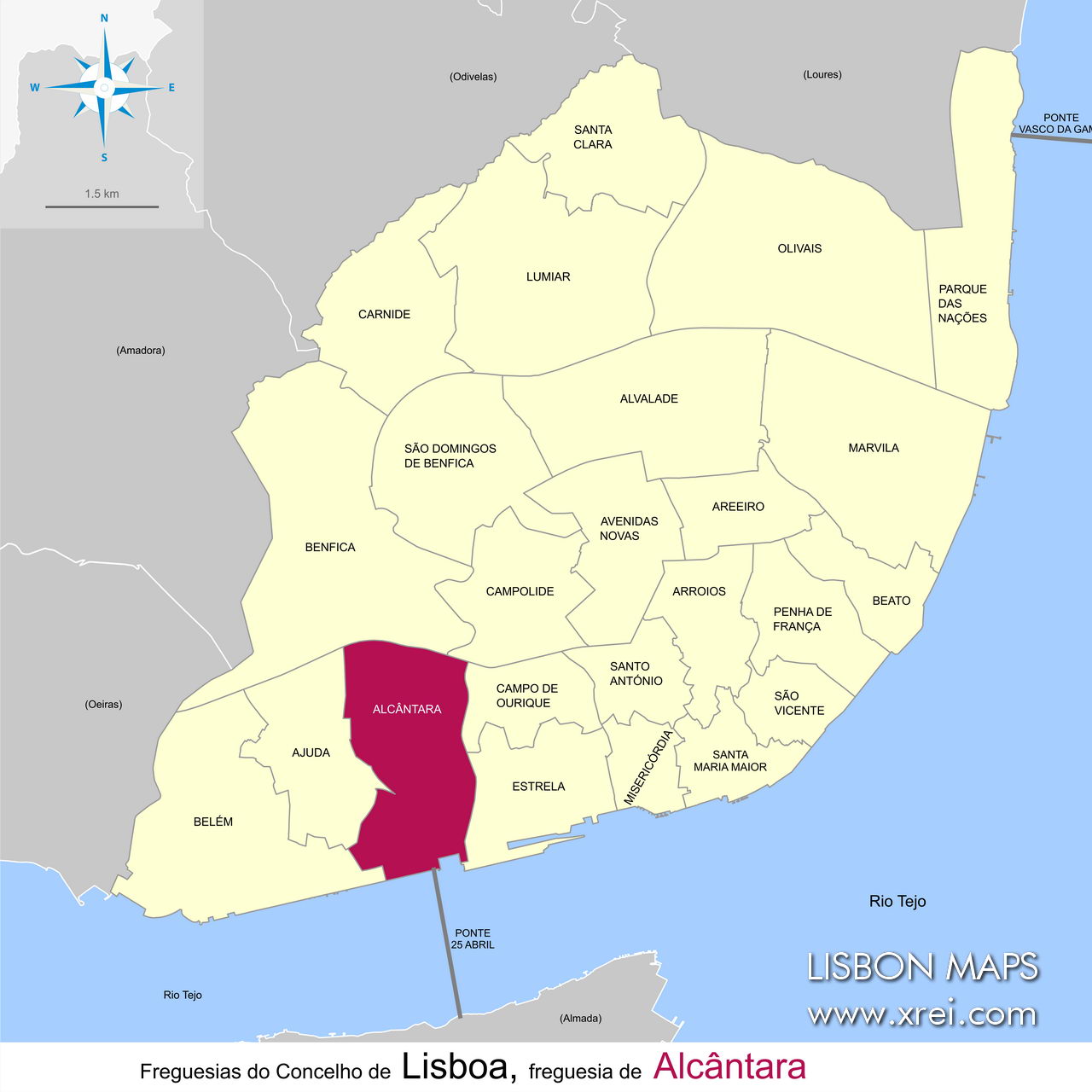 Alcântara parish location on the map of Lisbon