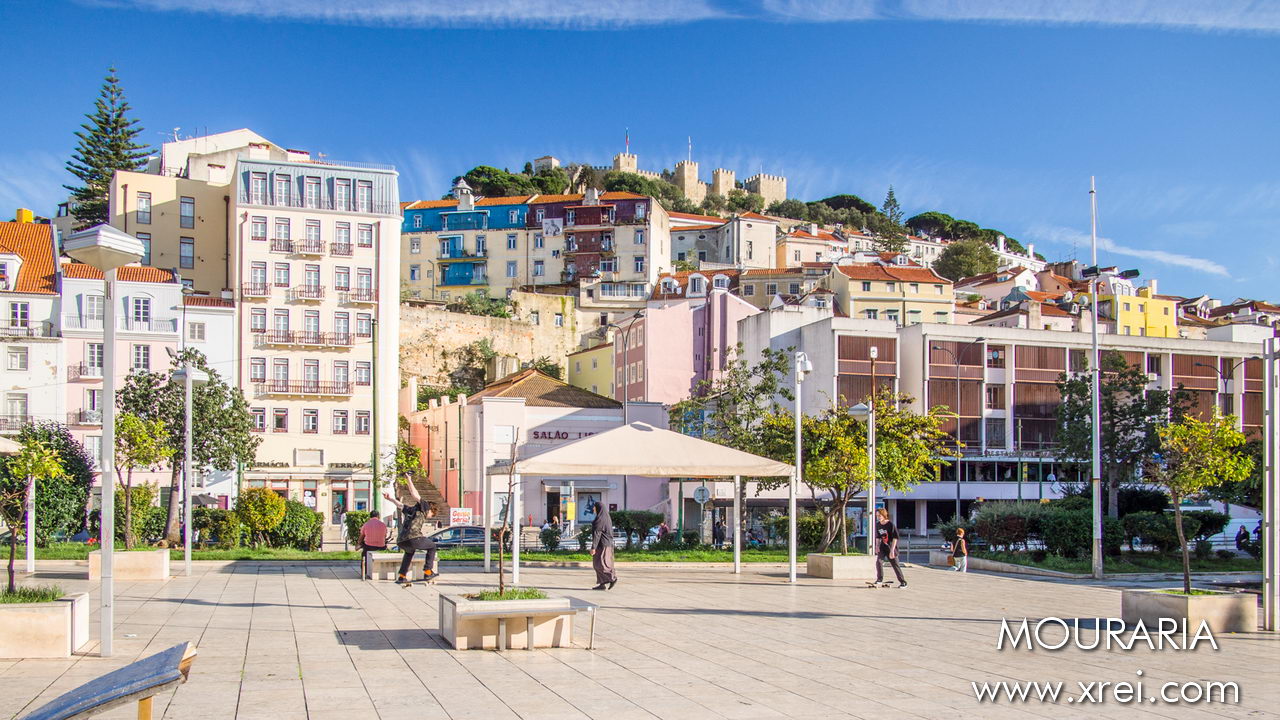 Mouraria neighborhood seen from Martin Moniz, with São Jorge Castle at the top of the hill

Mouraria is one of the most central typical neighborhoods in Lisbon, a neighborhood where we can feel and see what it is like to be from Lisbon in a mix of international environments. It is a neighborhood that has to be lived and felt to be able to understand the life of Portuguese Fado culture in harmony with the inhabitants of Eastern and African cultures. In Mouraria, it is possible to see buildings and streets of different styles and times: from buildings with simple facades to the most elaborate facades, from the most winding streets, to the widest streets. Due to the slopes of the streets, in Mouraria you can see the windows at the top of stairs, and vice versa, it is a winding and labyrinthine neighborhood. It is the neighborhood where Dom Afonso Henriques placed the Muslims who continued to live in Lisbon after the Christian Reconquista in 1147. It is the neighborhood of fado, the place where Severa, was the first fado singer known. Mouraria has a life of its own: it has a large number of shops and small shops, fado houses, restaurants and taverns where we can taste the most typical recipes from Portugal and other places in the world. It is a neighborhood with one of the greatest cultural diversities in the Portuguese capital, with over 60 nationalities, with great communities from Asian and African countries, namely Pakistan, Bangladesh, China, India and Mozambique, which is why we can smell the aromas in the air characteristics of the eastern world. At Mouraria, racial and cultural diversity contributes to a peaceful life in harmony. A place to live, invest and visit.

The Mouraria neighborhood is administered by the Santa Maria Maior Parish Council.

Mouraria is a multicultural neighborhood, full of smells, colors, sounds … As we enter Mouraria, we feel the narrowing of the streets, with the agglomeration of people of different ethnicities crossing the streets, labyrinthine streets, with the traditional Portuguese natural stone floor polished by age. There are several paths that we can take to get to know Mouraria, enter through Martin Moniz square, through Arroios, arrive through Baixa, down through Alfama, or through Graça, next to the Castle slope. Mouraria is a neighborhood surrounded by Lisbon’s most historic neighborhoods Mouraria is a neighborhood of labyrinthine streets, with buildings built on the hillside, with different colors and diverse environments. 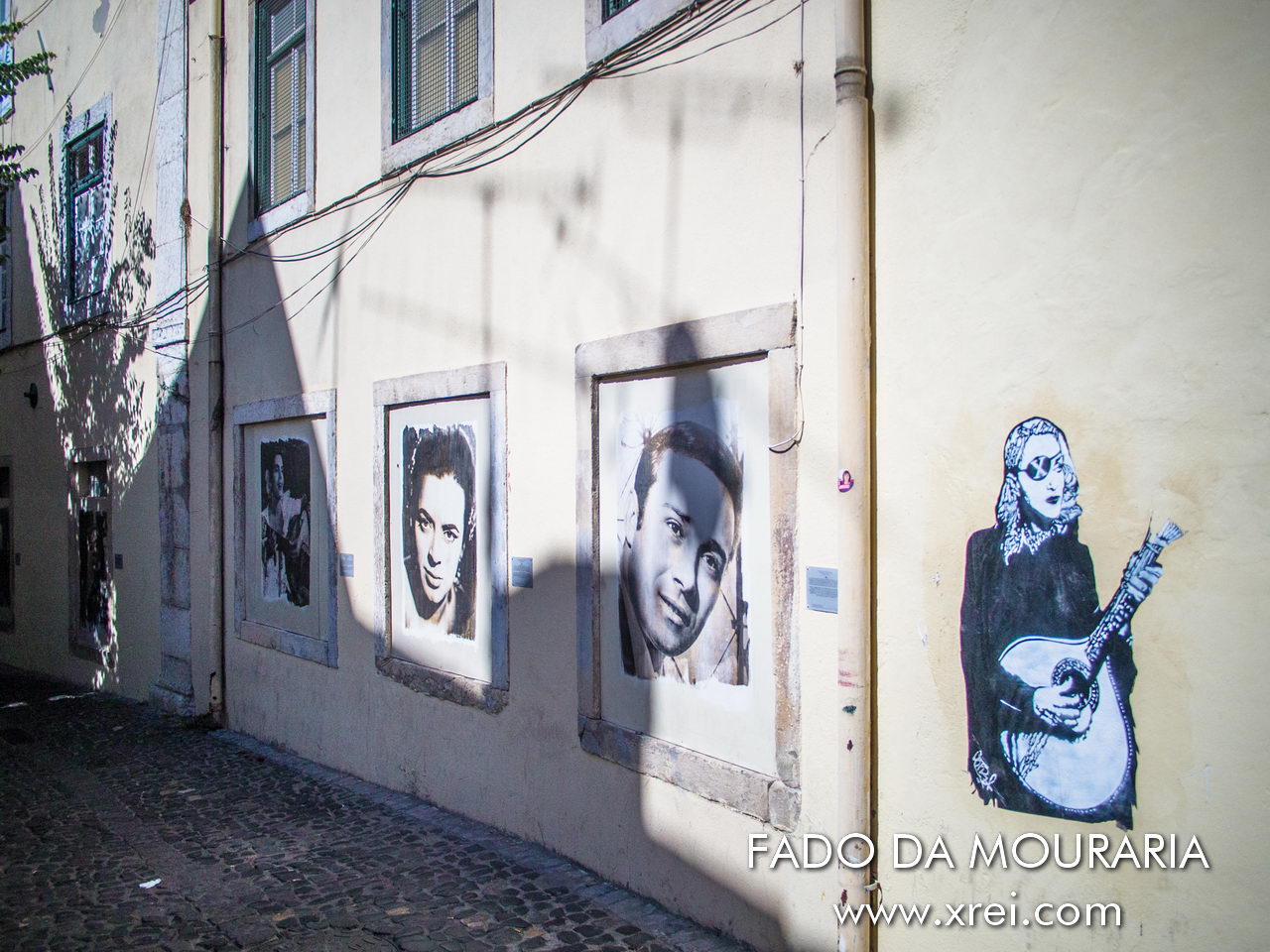 Mouraria is synonymous with Fado, it was here that some of the great characters related to the origin of Fado in Portugal lived, namely Maria Severa, the first famous fado singer, Fernando Maurício, the king of Mado fado, and many others

Main attractions to visit in the Mouraria neighborhood (top 10)

2. Casa da Severa is an extension of the Fado Museum, where you can listen to fado and get to know the life of Maria Severa Onofriana, known as the first Portuguese fado singer. At the Casa da Severa located in Largo da Severa we can visit the Casa de fados and the Café bar. 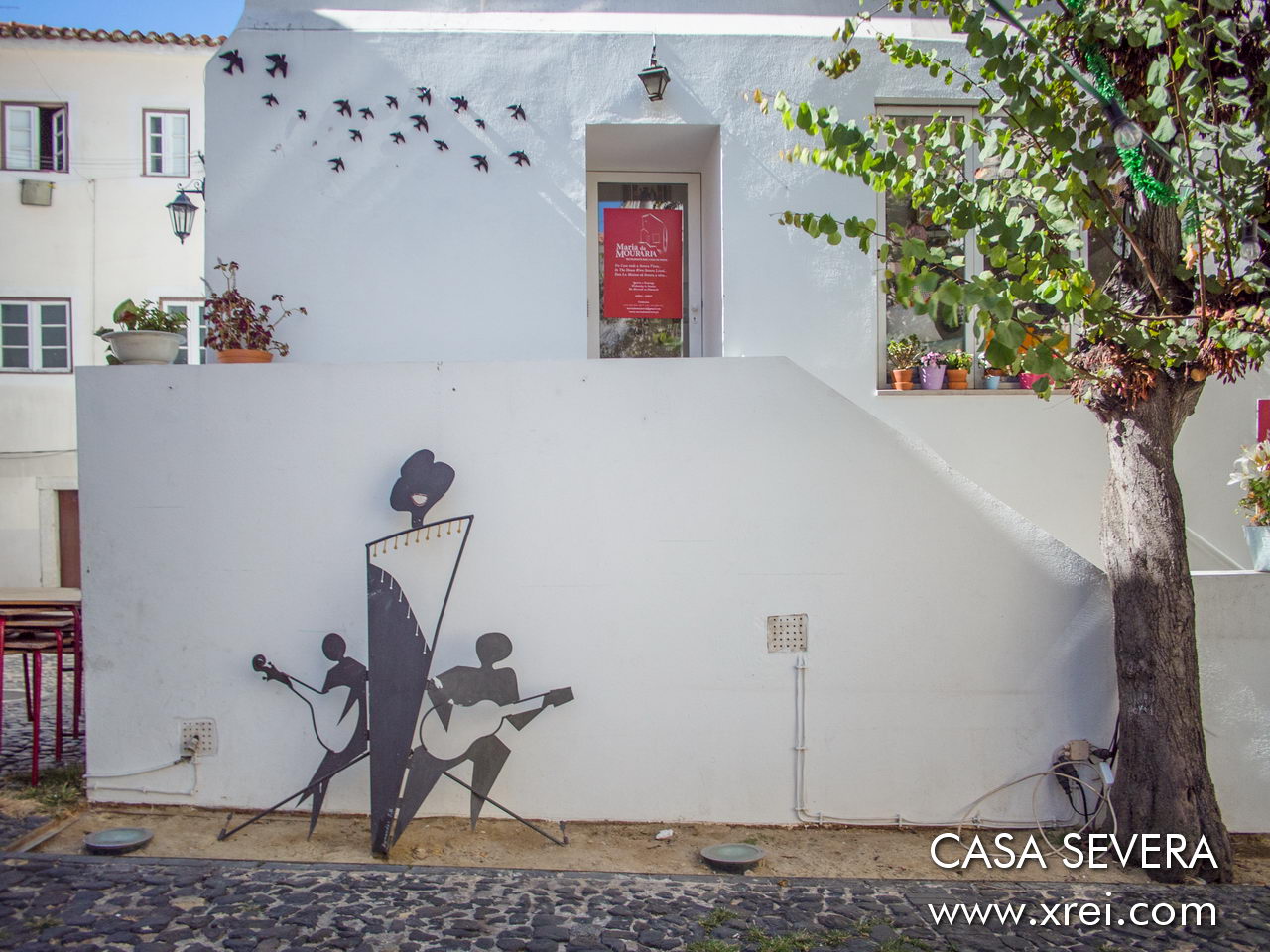 Casa da Severa is an extension of the Fado Museum, where you can listen to fado and get to know the life of Maria Severa Onofriana

3. Igreja de São Cristóvão is a 17th century building located in Largo de São Cristóvão, integrating one of the oldest parishes in the city of Lisbon, known in the 13th century as Igreja de Santa Maria de Alcamim. The highlights of the Igreja de São Cristóvão are the 36 paintings painted by Bento Coelho da Silveira (1617-1708); the Tomb of Bishop Dom Fernando de Miranda, chaplain of Dom Afonso V; and o o Tomb of Dom Martim Afonso, Archbishop of Braga, Governor during the Reign of Dom Duarte and main Councilor of Dom João II.

São Cristóvão Church is a 17th century building, one of the very rare buildings in Lisbon that was miraculously spared by the 1755 earthquake 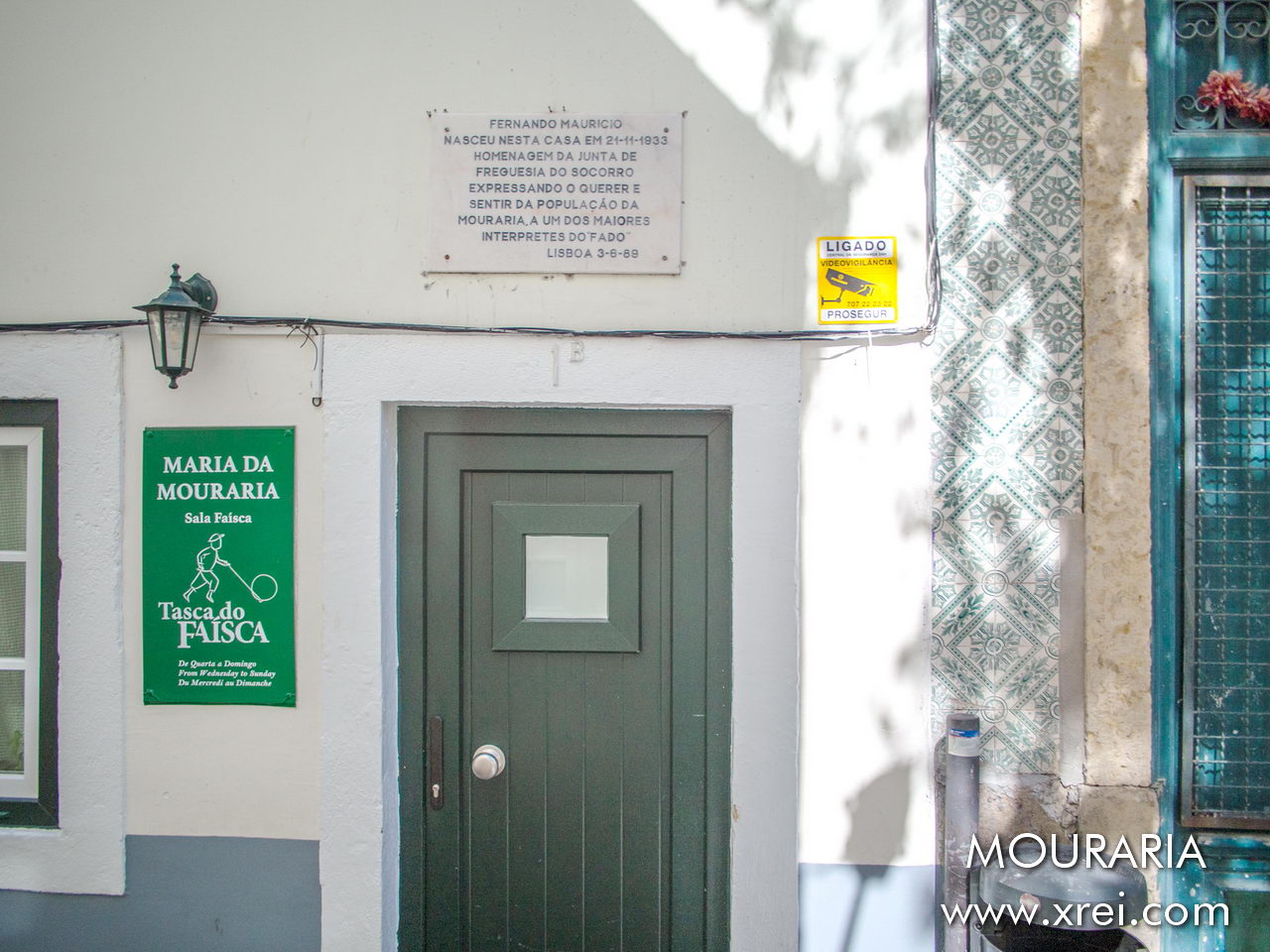 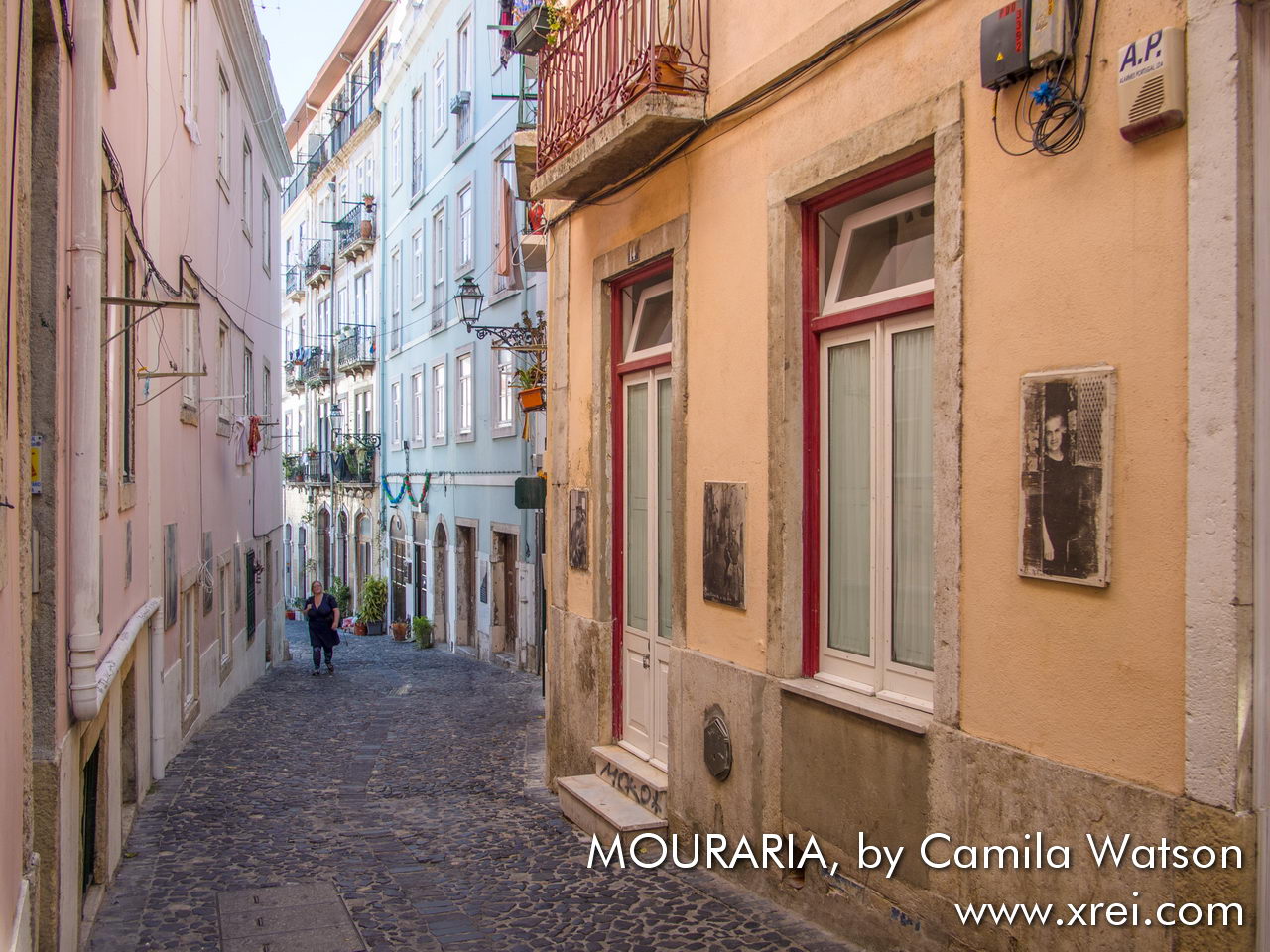 Rua das Farinhas in Mouraria, where we find a part of Camila Watson’s photographic exhibition dedicated to residents of the Mouraria neighborhood

9. Mouraria Innovation Center / Mouraria Creative Hub is the first “incubator dedicated to the cultural and creative industries of Lisbon”, located at Rua dos Lagares. The Innovation Center is intended to be a space to support entrepreneurs in various business areas, namely Gastronomy, Design, Fashion, Music or Tiles, with the following attractions that we can visit: a Space for 50 entrepreneurs; the Archeology exhibition “Quarteirão dos Lagares: with the theme from Mouraria to Vila Nova.

10. Popular Cuisine of Mouraria is a multicultural project that aims to use gastronomy to socially integrate immigrants who live in Mouraria from all corners of the world. The Cozinha Popular da Mouraria is located at Rua das Olarias, with the main attractions focused on the aromas of Asian, African or Arab cuisine or the experience of cooking the recipe that will serve as a meal.

Other attractions to explore in the Mouraria neighborhood

Main streets and squares in the Mouraria neighborhood

Praça Martim Moniz is one of the largest squares in the city of Lisbon, always bustling with locals, tourists, trams, tuck tucks, private vehicles and public transport. The Praça Martim Moniz is a crossing point for Mouraria, Largo do Intendente and Baixa, being known for several aspects, namely for the multiculturality, by be the starting point of historic Tram 28 and the handicraft and gastronomy fairs. Martim Moniz was the knight of Dom Afonso Henriques who died when he prevented the closing of a from the doors of the city of Lisbon in 1147, this gesture having allowed the taking of Lisbon.

Street Mouraria is the most important street in the district of Mouraria, with connection between Praça Martim Moniz and Rua do Benformoso. The Rua da Mouraria is a large place, where it is possible to observe multiculturalism, to feel the smells of the neighborhood, namely through the presence of several Chinese, Indian or Nepalese restaurants, Guinean or Mozambican cafés, Nepalese or Pakistani trips, Halal meat butchers or through the sale of Asian spices and teas at the Mouraria Shopping Center. The Rua da Mouraria has some attractions, namely the tram stop 28 and the Church of Nossa Senhora da Saúde. Mouraria is so named because it was the place where Muslims lived after the Conquest of Lisbon in 1147.

Largo da Severa is one of the most important squares in Mouraria due to the birthplace of Severa Onofriana, the first Portuguese fado singer. The Largo da Severa connects Rua do Capelão to Rua da Guia, with the attractions of Casa da Severa and Casa Fernando Maurício.

Street do Capelão is the place where Fernando Maurício was born. The Rua do Capelão connects Rua da Mouraria to Largo da Severa, being named after the presence of a prayer space in the 16th century. The main attractions are the Monument dedicated to “Mouraria – Berço do Fado”; the restaurant “Os Amigos da Severa”; the Casa de Fados Maria da Mouraria; and the Exhibition by the artist Camilla Watson which depicts twenty-six fadistas linked to Mouraria.

Mouraria has the following transport available: 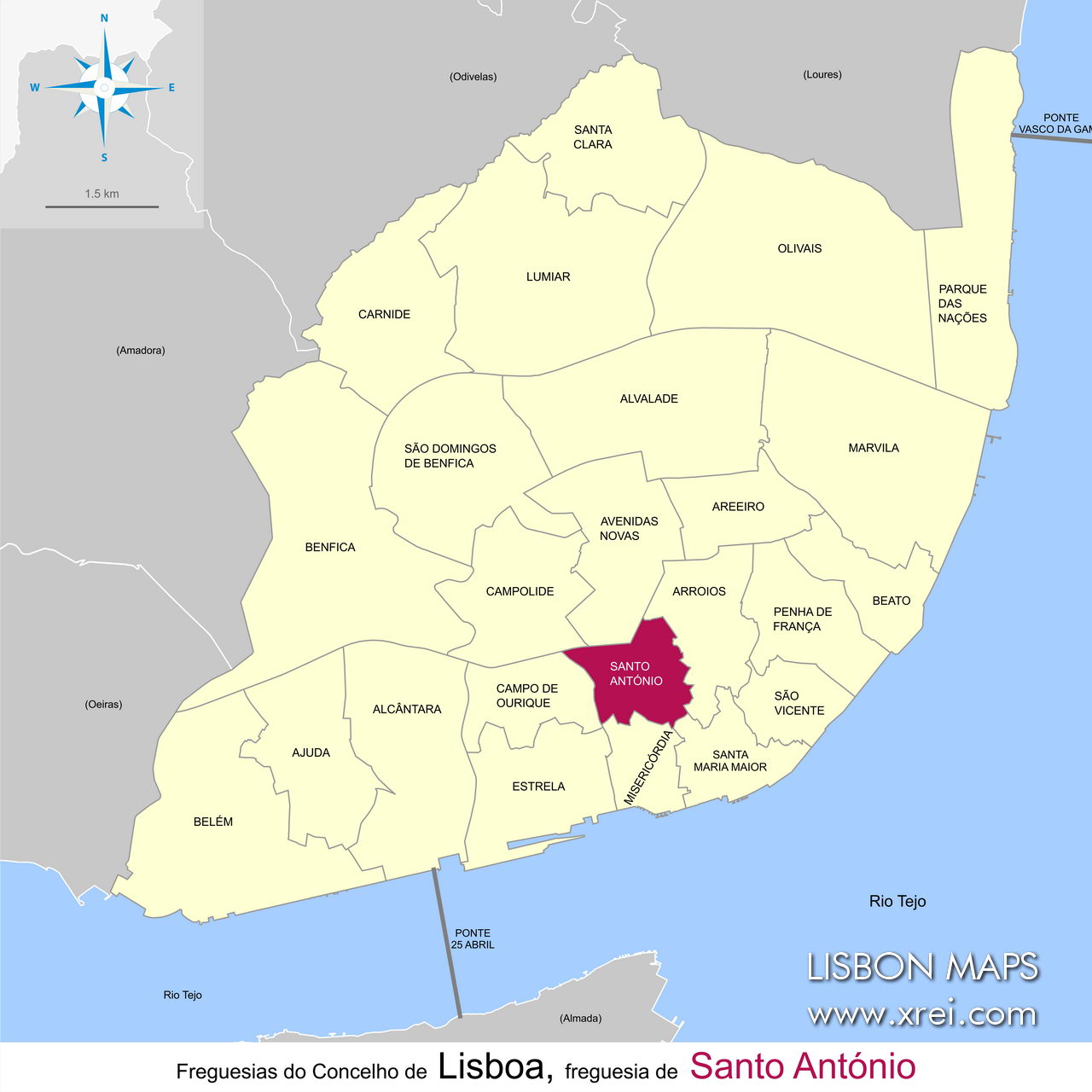 Santo António parish location on the map of Lisbon