by moraferia | Center of Portugal 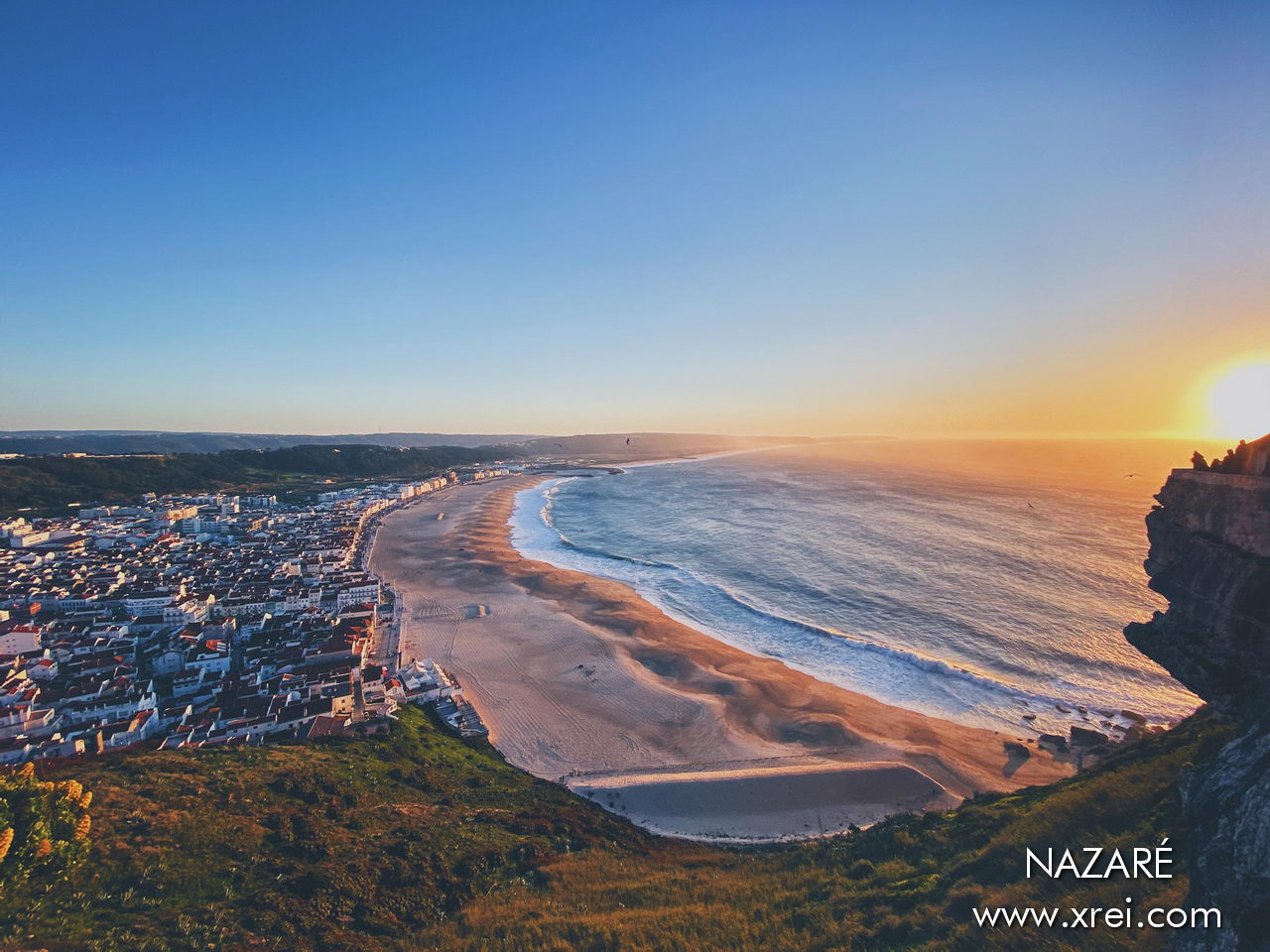 Nazaré was formerly a fishing village, located in the West of Lisbon. Nowadays it is a tourist destination for the beach, and one of the most famous giant wave surf spots in the world!

Nazaré is an old fishing village in the district of Leiria, located in the West region of Lisbon. Nazaré has become famous in recent years due to the biggest waves in the world surfed on Praia do Norte, over 35 meters high. It is in Nazaré that the Big Wave Nazaré Challenge takes place – one of the stages of the World Surfing Championship. It is a village with characteristics of narrow and winding streets, with Praia da Nazaré highly sought after by families in the summer season, with the funicular from Nazaré, by Sítio da Nazaré, and with a gastronomy rich in fresh fish, seafood and fish.
The village of Nazaré is very popular during the summer with beach tourism, and in the winter it is sought after by a new community of big wave surfers who set up to train and compete on the giant waves. It is common for Nazarenas, known for their typical seven-skirt trages, to advertise rooms to rent posters in their hands, to attract tourists to traditional accommodation in rooms of old fishermen’s houses, which have since been converted into local accommodation. Most of the accommodations are located in the sub-village, close to Praia da Nazaré.
One of the great highlights of Nazaré is the coastal avenue, where we will find the traditional fish stretched on hammocks drying in the sun, people strolling in the summer months, dozens of street artists, souvenir shops, restaurants, and several street vendors with snacks and seafood. 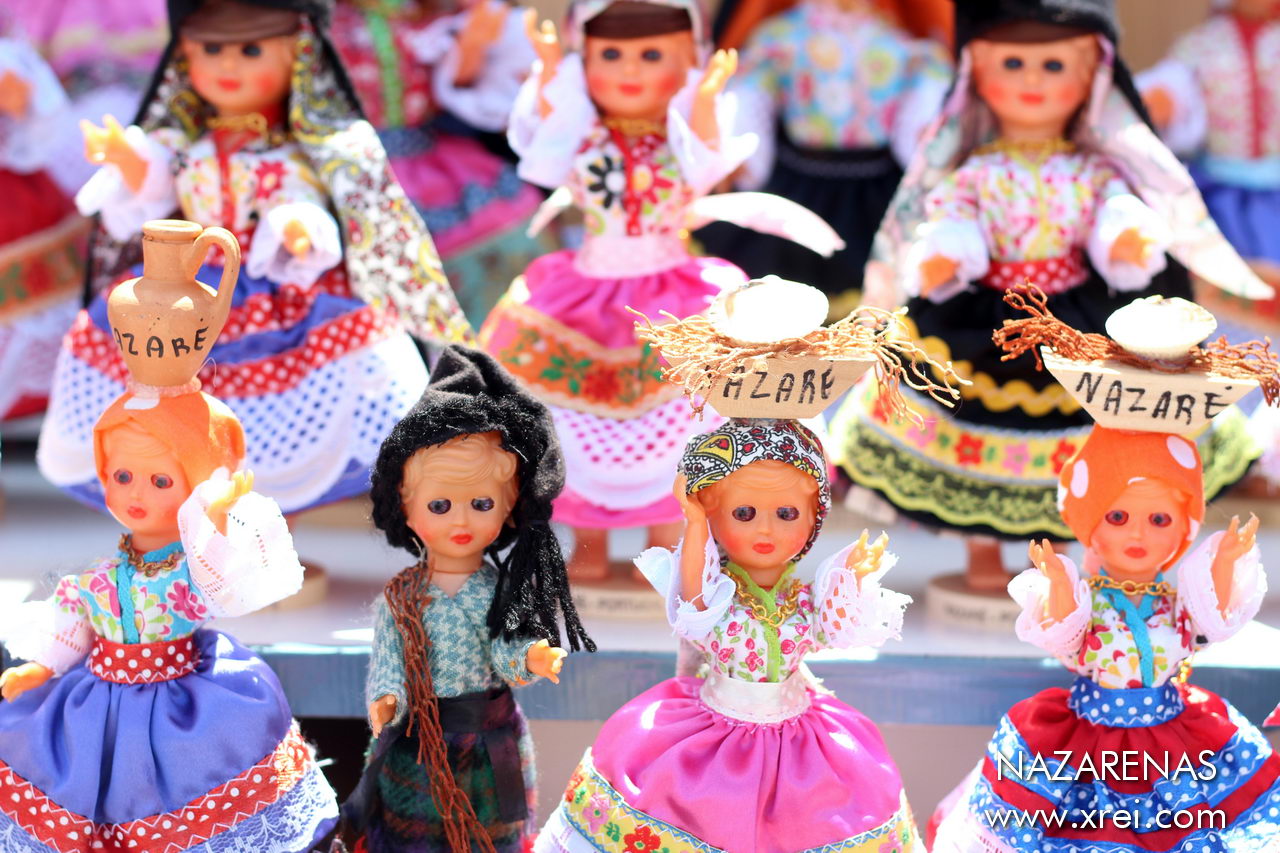 The municipality of Nazaré, is close to Fátima, Alcobaça, Batalha, Tomar and Óbidos, has approximately 15 thousand inhabitants and is administratively organized in three parishes:

Nazaré is an increasingly popular place for holidays due to the friendliness of the Nazarenes and Nazarenes, the gastronomy, the surf, the genuineness of the village and security.

Attractions to visit in Nazaré (top 10) 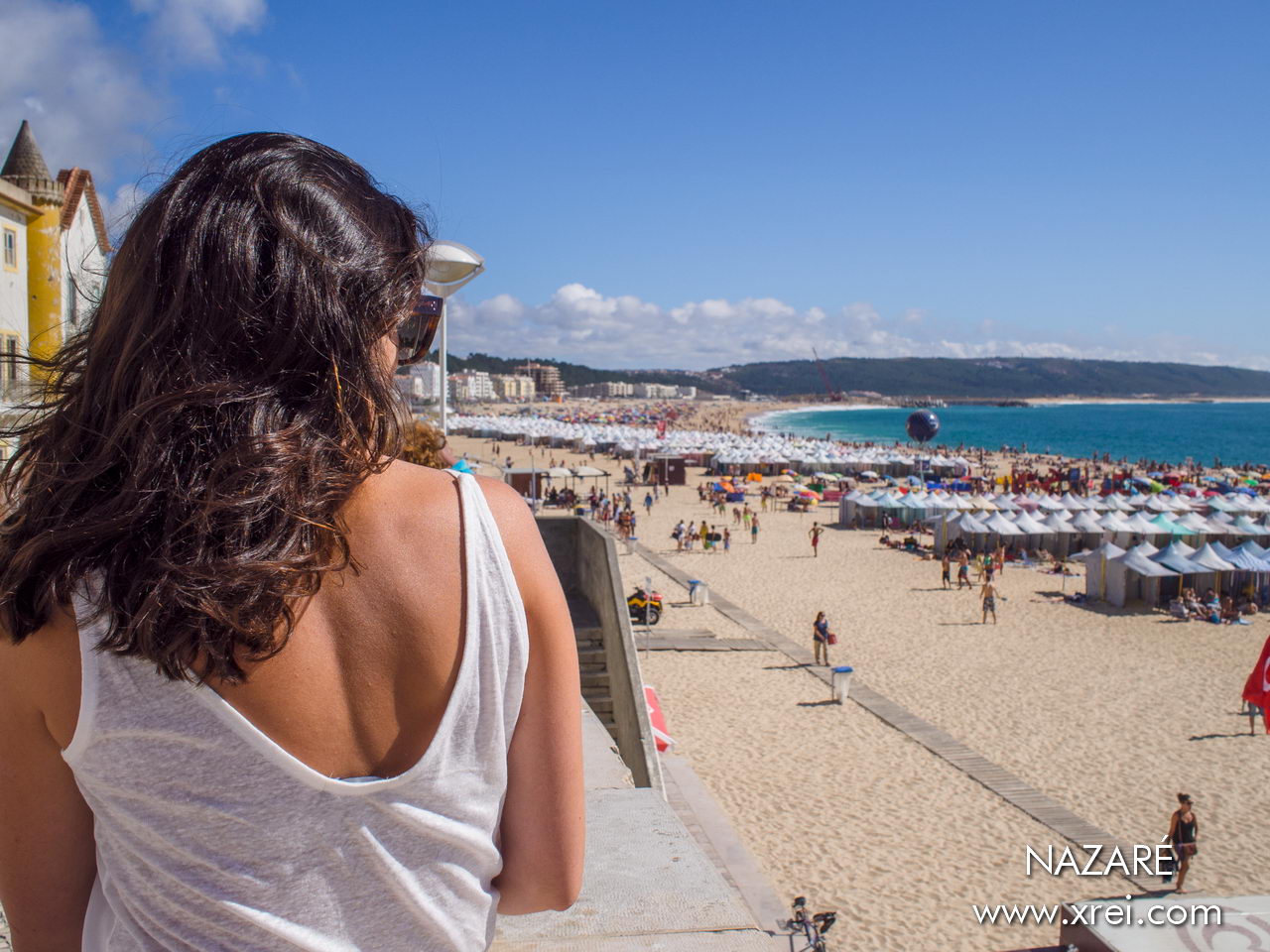 Praia da Nazaré, located in the lower part of the village of Nazaré, with a coastal avenue and an extensive sandy beach with a magnificent landscape of the Atlantic Ocean

1. Praia da Nazaré: it is the best known beach in the village, it is in front of the sub-village. It is the place chosen by families during the summer, the time of year when it is possible to see the typical blue and white striped cloth tents. With an extensive beach, Praia da Nazaré stretches along the coast to Porto de Abrigo. 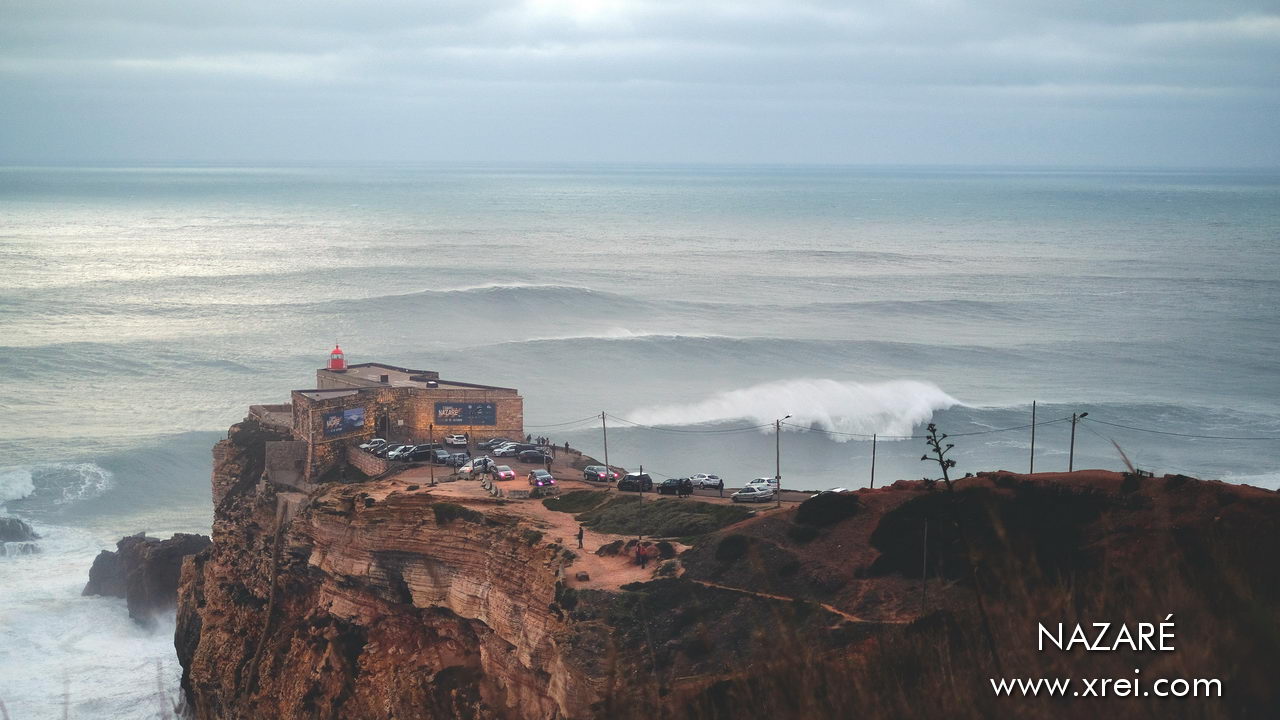 Nazaré Lighthouse, with the São Miguel Arcanjo Fort and the giant waves of the northern beach

3. Praia do Norte: it is one of the best known beaches in Nazaré due to the giant waves. It is one of the most popular places for surfing and sport fishing. Next to Praia do Norte is the Gruta do Forno da Orca, a natural cave created by erosion and which can be visited during low tide, the Duna da Aguieira, considered the largest consolidated dune in Europe, and the Norpark Water Park, which it offers several swimming pools for adults and children, jacuzzis with temperatures around 30ºC, a bar with a terrace and a football field.

6. São Miguel Arcanjo Fort: built in 1577 with the aim of protecting Nazaré from attacks by Dutch, Algerian, Moroccan and Norman pirates. In 1644 it was improved and resisted the French Invasions. Napoleon’s troops were forced to take shelter here due to the revolt that would eventually expel the invaders that took place in Pederneira and “Sítio da Nazaré”. Near the São Miguel Arcanjo Fort there is a lighthouse built in 1903 and the viewpoint of Barbaçã. 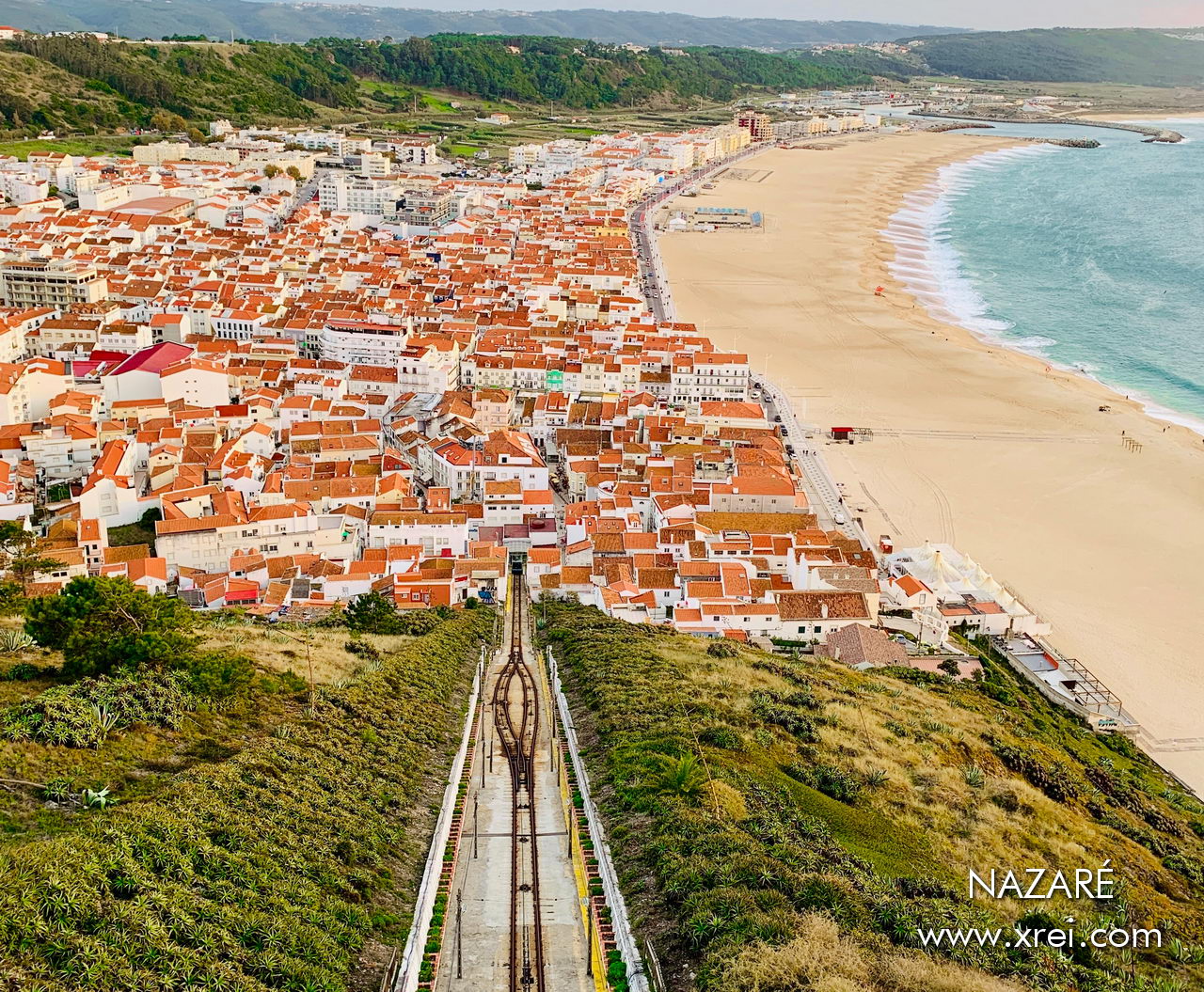 7. Funicular or Elevador da Nazaré: the Nazaré Elevator was built with the aim of facilitating access to the “Sítio da Nazaré” and to the Sanctuary of Nossa Senhora da Nazaré. The funicular was inaugurated on July 28, 1889, by the French engineer Raul Mesnier du Ponsard, a student of Eiffel, responsible for most of the funiculars built in Lisbon. The Nazaré Elevator covers a distance of 318 meters in fifteen minutes, with a slope of 42%. It currently carries around one million passengers a year.

8. Marginal da Nazaré: the Marginal da Nazaré runs along the entire beach of Praia da Nazaré. Along the tour, it is possible to see numerous souvenir shops, craft stores, restaurants, ice cream parlors, a craft fair, horse mackerel and sardines to dry in the sun on hammocks (known as drying racks or paneiros), traditional fishing boats and thousands of people walking. A must for anyone visiting Nazaré.

10. Royal Palace: built in 1718 by Dom Nuno Álvares Pereira de Mello, administrator of the Royal House of Nossa Senhora da Nazaré, with the aim of accommodating the Royal Family when making the pilgrimage to Nazaré. The main highlights are the records of Dom João VI’s visits; and the large balustrade balcony.

The Beaches of Nazaré

Map of parishes in the municipality of Nazaré

The municipality of Nazaré, is close to Fátima, Alcobaça, Batalha, Tomar and Óbidos, has approximately 15 thousand inhabitants and is administratively organized in three parishes: 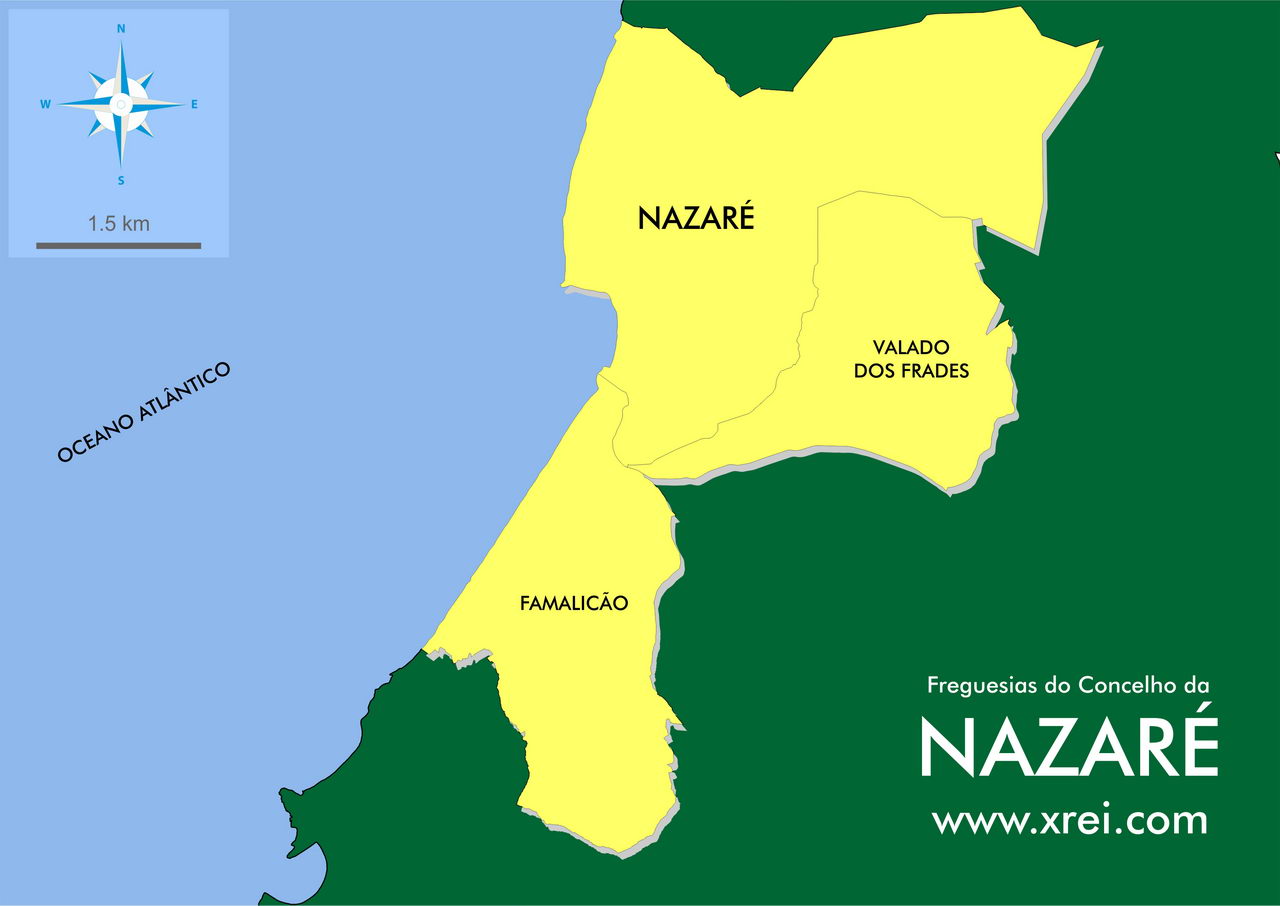 Map of parishes in the municipality of Nazaré