Esplanade of the Graça viewpoint bar, overlooking the city and opportunity to enjoy the panoramic view over the city of Lisbon

The Bairro da Graça is a historic neighborhood located on Colina de Santo André, the highest hill in the city of Lisbon, with a wide variety of buildings, urban art murals, streets, squares, gardens, workers’ villages, viewpoints and palaces. In the streets of the Bairro da Graça it is possible to observe the constant movement of the inhabitants of a traditional village within a large city, the trams (the famous Tram 28 passes through here), the tuck-tuck, the public transport and cars.

Graça is one of the most typical neighborhoods in Lisbon, where you can feel what it is like to be from Lisbon, where you get fantastic panoramic views over the whole city, a place where we can sample Portuguese cuisine in one of the many local restaurants. It is a neighborhood full of its own life with countless shops, cafes, pastry shops, bakeries, fishmongers. We find a wide variety of attractions and local shops in the Bairro da Graça without needing a means of transport. It is all close in this neighborhood. The Bairro da Graça is close to Alfama, close to Castelo de São Jorge, close to Feira da Ladra … It is a village within the city where all people meet and greet each other. The Graça neighborhood has been much rehabilitated lately, which in recent years has led to an increase in demand from new national and foreign residents. It is a safe and quiet neighborhood.

Graça is administered by the São Vicente Parish Council.

Attractions to visit in the Graça neighborhood (Top 10) 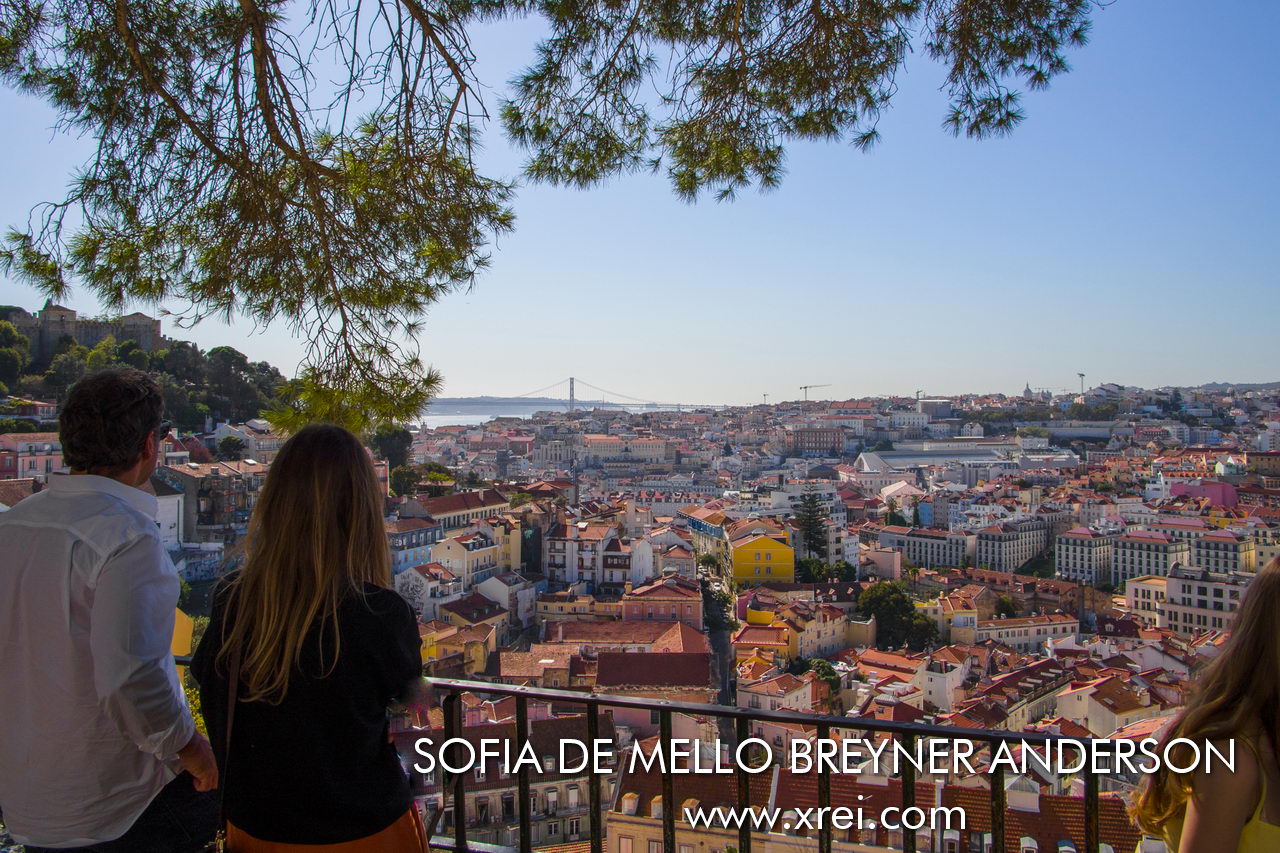 Sophia de Mello Viewpoint Breyner Andersen, commonly known as Graça viewpoint, is one of the privileged places to observe Mouraria, Baixa, Alfama, the Castle, the 25 de Abril Bridge, the Tagus River and the Serra da Arrábida on the other side of the Tagus , with a terrace where we can enjoy the shade of the trees, and the architecture of the Convento and Igreja da Graça

2. Igreja e Convento da Graça is an 18th century building designed by architects Caetano Tomás de Sousa and Manuel Caetano de Sousa. The first convent was inaugurated in 1271 to house fifty monks of the Order of the Hermits of Santo Agostinho, being dedicated to the cult of Nossa Senhora da Graça.

Graça Convent, a historic convent built in the 18th century on the site of an old convent dating from 1271 … in 2019 the Graça convent was granted to a hotel group for the installation of a hotel with 120 rooms, with opening scheduled for the end of 2022.

The main highlights of the Igreja e Convento da Graça are:

3. Nossa Senhora do Monte viewpoint located in Largo do Monte at approximately 90 meters of altitude, it is one of the highest viewpoints in the city of Lisbon. The viewpoint is a must-visit place for visitors due to the magnificent view over the city, the presence of bars, restaurants and cafes, always with the presence of locals and tourists, especially in the late afternoon to watch the sunset. . The main highlights of the Miradouro de Nossa Senhora do Monte are the view over the Castle of São Jorge, Baixa Pombalina, Convento do Carmo, Monsanto, Avenidas Novas, Penha de França and Mouraria; the Capela de São Gens in honor of the first Archbishop of Lisbon, murdered in this place by the Romans due to the spread of Catholicism. The highlight of the chapel is the Chair of São Gens which, according to the legend, helps to cure infertility. Miradouro Nossa Senhora do Monte is one of the highest viewpoints in the city of Lisbon from where we can observe a panoramic view over the Castle of São Jorge, Baixa Pombalina, Convento do Carmo, Monsanto, Avenidas Novas, Penha de França and the Mouraria

4. Voz do Operário is an educational and charitable society in the city of Lisbon that presents innovative teaching methods, located at Rua da Voz do Operário. “Voz do Operário” was founded during the growth of the Movimento Operário in Portugal in the second half of the 19th century, related to the tobacco industry. This institution was created with the objective of literacy and organizing the strike movements carried out by a large part of the more than five thousand workers in this industry. The Voz do Operário had some important historical episodes, namely the founding of the newspaper “Voz do Operário” in 1879, the creation of the Cooperative Society A Voz do Operário, first School Commission in 1891 or the beginning of construction of the current building in 1912. This institution deserves a visit due to the Voz do Operário Social Library, one of the most important national libraries for the study of the 19th century union and labor movement.

5. Vila Berta: is a residential and office area, located at Rua do Sol à Graça, built at the beginning of the 20th century by businessman Joaquim Francisco Tojal with the objective of accommodating family, friends, masters and workers who worked at the Tojal Shipyard. Joaquim Francisco Tojal bought the land part of Quinta do Alcaide Fidalgo in 1887, having named the condominium “Vila Berta” in honor of his daughter. The Vila Berta was inhabited by tailors, dressmakers, artists, construction professionals, engineers, architects, and other workers, especially from the 1960s onwards. The main points of interest of Vila Berta are the architecture of the buildings; the Tiles in Art Nouveau; the wrought iron balconies. 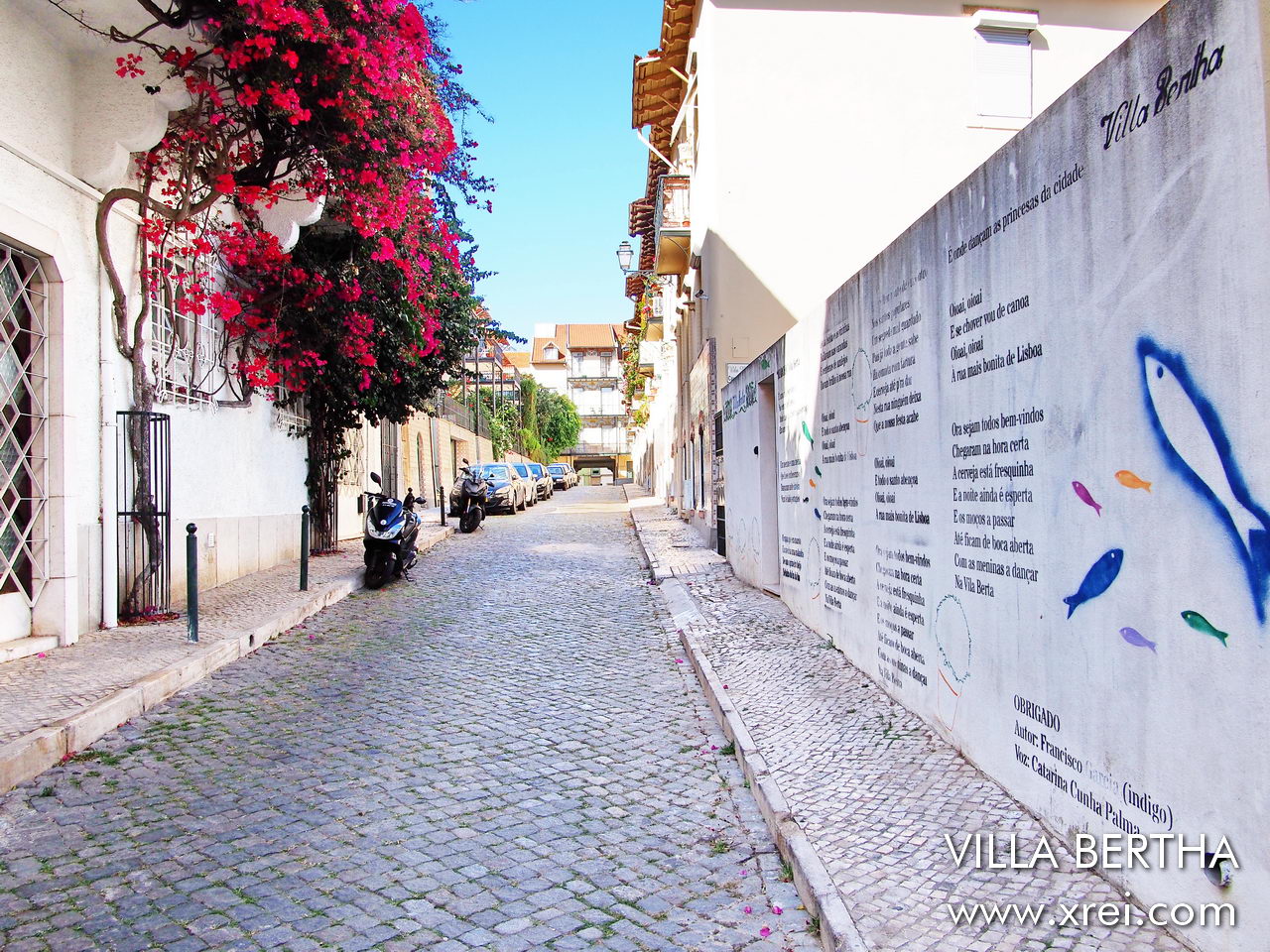 Villa Bertha is a residential and office area, located at Rua do Sol à Graça, built at the beginning of the 20th century by businessman Joaquim Francisco Tojal with the objective of accommodating family, friends, masters and workers who worked at Estaleiro Tojal

6. Chapel of Nossa Senhora da Glória is an 18th century building, located at Rua de Nossa Senhora da Glória, with emphasis on the Ceiling decoration; authored by F. A. Martins; the Capela-Mor with 18th century tiles representing themes related to flowers, medallion related to the Virgin Mary, authored by Pedro Alexandrino de Carvalho; and the gilded altarpiece by the carver António Nunes Colares.

7. Palácio dos Condes da Figueira is one of the few palaces in the city of Lisbon built before the 1755 Earthquake, located in Calçada da Graça. Dom João II authorized Dom João de Mendonça to build the palace near the Arco de Santo André in 1490, one of the entrances to Lisbon destroyed in the early 20th century. The palace came to be called “Palace of the Counts of Figueira” in the 19th century when Dona Maria de Mendonça married the First Count of Figueira. The main highlights of the Palácio dos Condes da Figueira are the main door dating from the 17th century raised by the coat of arms of Mendonça; and the 17th and 18th century tile panels

8. Palácio dos Senhores da Trofa is a 17th century building that integrates a hostel, located in Calçada da Graça. The main points of interest are the Central courtyard; the facade windows; and the 17th century gate.

9. Vila Sousa is a residential area, located in Largo da Graça. João Luís de Sousa built Vila Sousa in 1890, adapting an abandoned palace to that the family and the workers could live. The main highlights are the Main entrance with the inscription “Villa Sousa”, 1890 and “João Luís Sousa & Filho”; the central courtyard; and the decorated main facade. 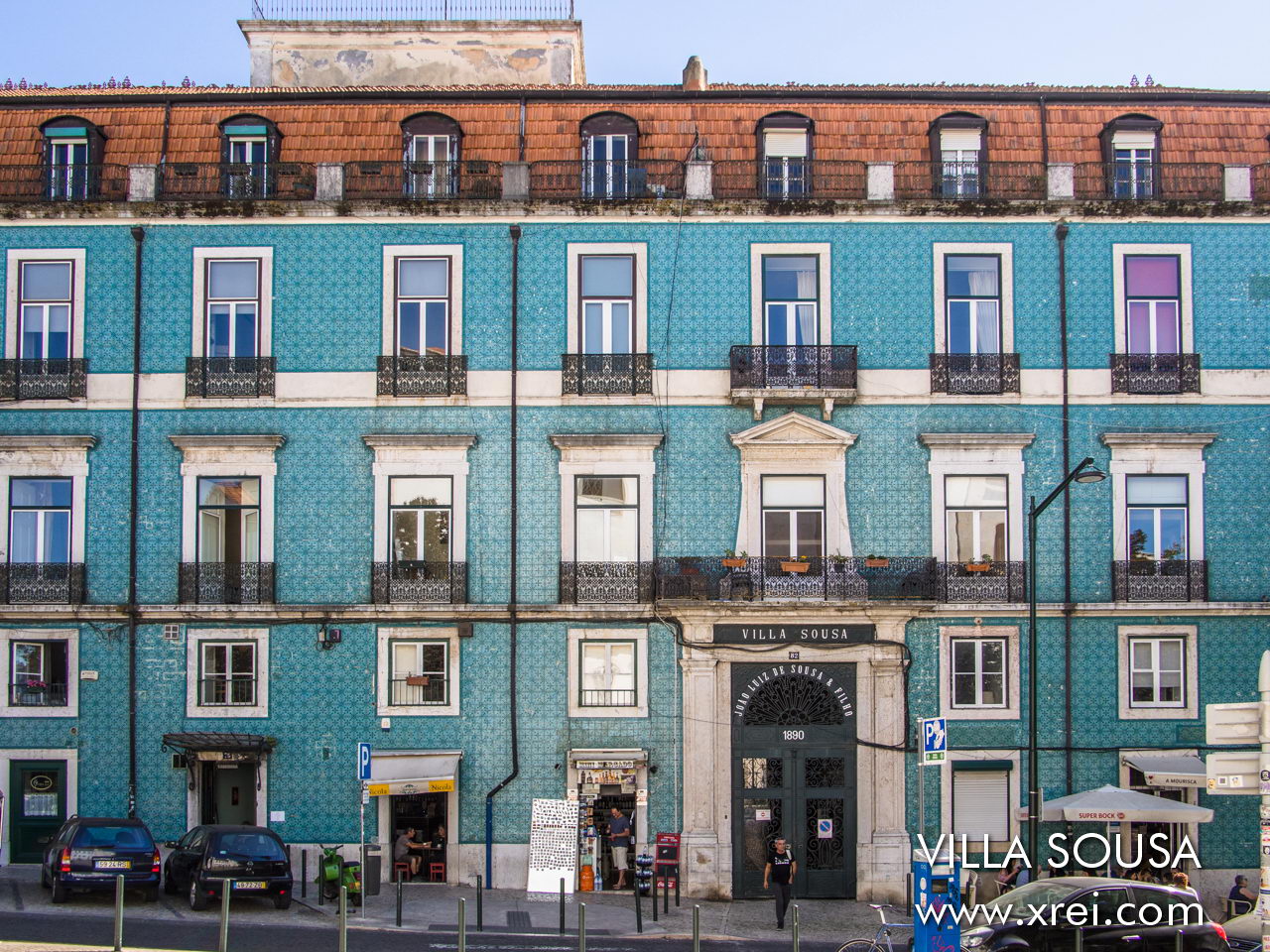 Villa Sousa is a condominium rebuilt in 1890 in a palace abandoned by order of Jão Luís de Sousa in order to house the family and the workers.

10. Cine Royal (current Pingo Doce supermarket) is a building from the 1920s that houses a supermarket, located on Rua da Graça. The Cine Royal was the first sound cinema in Lisbon, with a capacity of 900 seats and an orchestra space, opened in 1929 with a project by the architect Manuel Joaquim Norte Júnior (1878-1962) owned by the Galician businessman Agapito Serra Fernandes. The building performed several functions, namely the departure point Ascensor da Glória, which connected Rua da Graça to Rua da Palma, was a cinema between 1929 and 1983 and a supermarket. The main highlights of the building of the old Cine Royal are: the main façade, the Clock, the Symbol designed at the top of the door.

Other Attractions to explore in the Graça neighborhood

Largo da Graça is one of the busiest streets in Bairro da Graça during the day, with the constant movement of trams, tuck tucks and taxis, tourists, neighborhood residents and firefighters, of the two barracks nearby. Largo da Graça, connects Calçada da Graça to Rua da Voz do Operário, with several attractions, including the Le Bar à Crêpes, The Pitéu da Graça and the Jardim da Graça. The Largo da Graça has been designated this way since 1700, due to the presence of the old Convent of Nossa Senhora da Graça.

Largo da Graça is one of the busiest streets in Bairro da Graça during the day, with the constant movement of Lisbon trams (trams), tuck tucks and taxis, tourists, neighborhood residents and firefighters, from the two barracks nearby

Rua da Graça is one of the most important streets in this Lisbon neighborhood due to the large number of people, numerous restaurants, cafes, commercial establishments and public institutions that support the citizen. The Rua da Graça is one of the entry and exit points of Bairro da Graça through Rua dos Sapadores, which communicates directly with Bairro da Penha de França. Rua da Graça has several points of interest, namely Pingo Doce, where there was the Cine Royale, Bairro Estrela de Ouro or access to the Miradouro de Nossa Senhora do Monte through Rua da Senhora do Monte. The Rua da Graça is named after the construction of the Convent of Nossa Senhora da Graça History of the Graça neighborhood

Graça was the location chosen by the first king of Portugal Dom Afonso Henriques to prepare for the conquest of Lisbon in 1147. It was in this neighborhood that the Arab cemetery was located that was later used for the construction of two convents: one donated to the monks of São Vicente and another to the monks of Saint Augustine. The two convents were dedicated to Nossa Senhora da Graça. The palaces of Graça were built between the 16th and 18th centuries. Graça was a rural area until the Lisbon Earthquake of 1 November 1755, having only resisted the Convento dos Agostinhos. The Graça neighborhood started to take on its current form, from the 19th century, with the construction of Largo da Graça and Calçada da Graça. The Graça neighborhood lost its rural characteristics after the construction of the Santa Apolónia Train Station, which led to the emergence of new residents, namely workers and entrepreneurs linked to the industry. 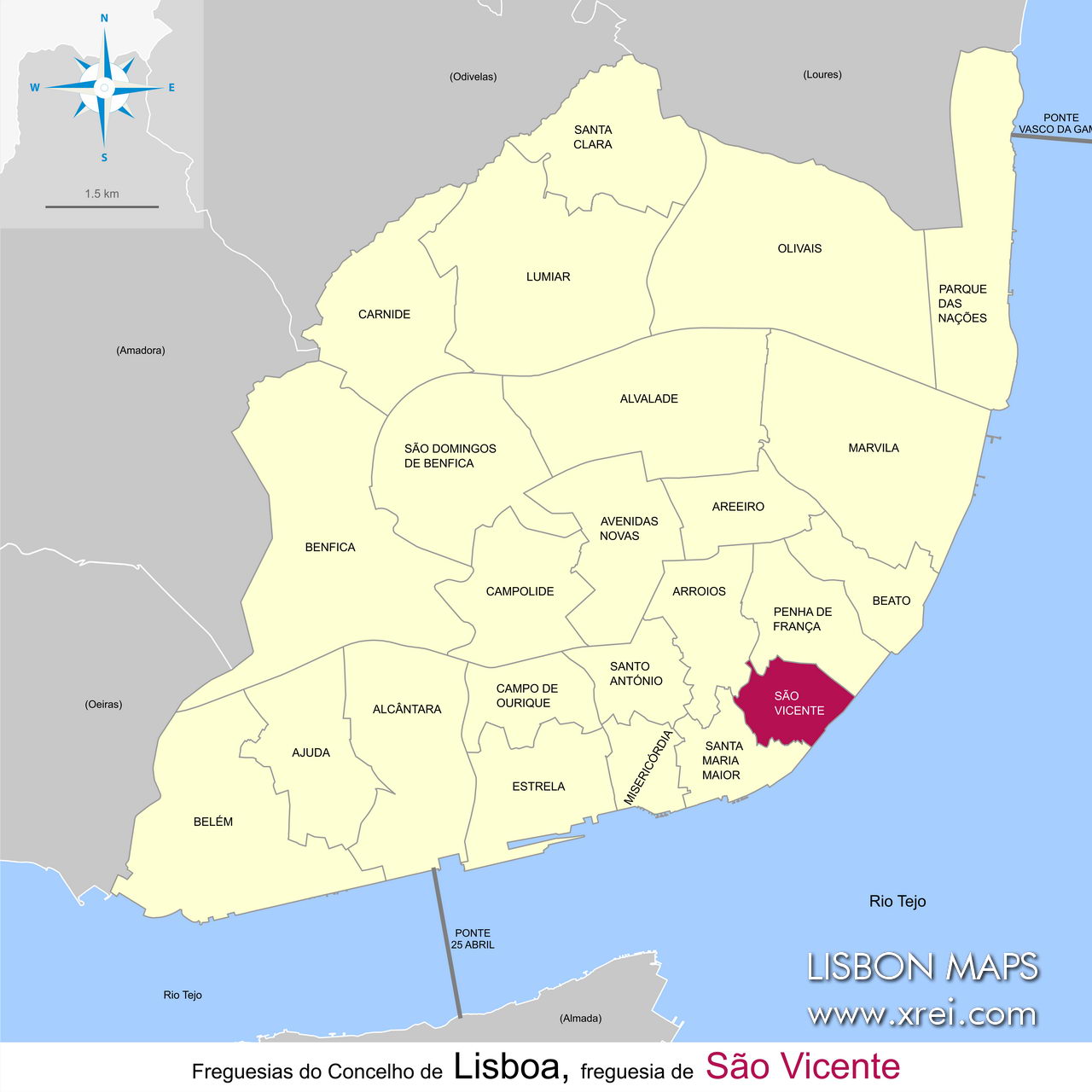 São Vicente parish location on the map of Lisbon